The old folks commandeered the center cluster of tables (I guess so they didn’t have to walk too far to the mic) while others, including some new faces, & audience/just-to-listeners were spread about the rest of the room, & others came in as the reading went on. Our host was Mary Panza, who at one point shared her experience in the rural hinterlands of Gloversville, NY when she performed recently at “Dorn’s Space;” hey, you can send a girl from South Troy to Gloversville, but you can’t make her move there either.

First to the open mic was Sylvia Barnard who read an older poem from her 2012 collection of poems Trees “Easter 1988,” then a new piece about the legendary British folk-lore figure “Green Man.” Joe Krausman’s first poem was about being alone, while his next poem pondered the end of Summer in the “garden of Good & Evil.” 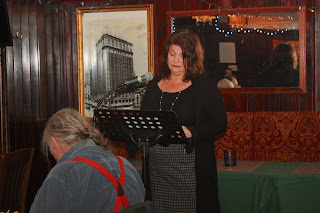 A new face & voice tonight, who was in fact a poetry-virgin, was Sally Delesandro who read 3 love poems, “The Wait” (on longing), “Naked,” & “Home,” & she made it through all 3 just fine. I didn’t have any problems reading my poems either, both new, “Are Ewe a Frank Robinson?” & the commentary on MFA programs “To the consternation…” 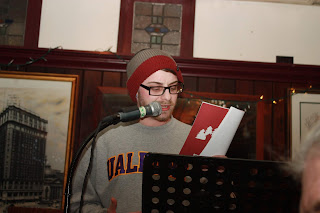 Tonight’s featured poet was Luciano Ferarra, whom I’d first seen back in August at the Low Beat (& subsequently only there). He read 9 of the 13 poems in his recently self-published chapbook Romanticizing the Art of Being Honest: An Experience of Meeting People, in a frantic rush that ran all the words together, the poems a string of automatic writings, self-indulgent jottings out of a late-night, post-party spiral notebook that used to have notes from a history class. The book contains not only his poems but a portfolio of photographs he’s taken, including 2 of pet dogs, & a couple of performance shots (he plays guitar) taken by others. It was printed by one of those ubiquitous publishing services that have cropped up online in recent years. Buy his books so he can buy beers & not hold up a convenience store.

Don Levy was up to continue the open mic with a seasonal poem “Up Your Chimney, Santa” responding to the character of Santa in that gay-classic TV special, Rudolph the Red-Nosed Reindeer. Bob Sharkey’s poem “One Day this Kid Will” was inspired by a photo exhibit at the Museum of the City of New York & a photo by David Wojnarowicz, & then a cento from entries from last year’s Stephan A. DiBiase Poetry Contest titled “We Are Delivered by Wonders.”

Christa DeMarco, who will be the featured poet here in February, began with a poem, like a letter to her mom about their conflicts, her next poem styled as a computer message about a system shutdown, titled “Destruction Imminent,” made some of us wish her voice was used as the voice of the computer. We were pleased to see Julie Lomoe back from subdural hematoma less than a month ago, & she has a new writing project titled “Subdural” that seemed to be composed of a string of short poems she called Haiku, then on to a prose narrative about Thanksgiving Day at the U.U. with her family — Julie is back. Samuel Weinstein came in with his father, as he often does, then dismissed him before reading from his long poem “In a Pinch” (“about schizophrenia” he said, & sex), then one titled “A Bit Brighter.”