Getting Down to Brass Tacks, November 20


This was certainly the shortest open mic I’ve been at, perhaps ever, but, as a former girlfriend once said to me, “shortest doesn’t mean it’s not fun…”

We were at The Low Beat for the 3rd Tuesday open mic & in addition to the poets on the very short list there were folks hanging out at the bar to listen to poetry, & that's not bad. Our host was AlbanyPoets el presidente Thom Francis.

& I was first on the list, which was easy to do tonight. I have been going through my files & found a poem written in response to a call for entries in 1997 from the guys running Chronicles of Disorder to celebrate the birthday of James Joyce by writing on February 2, 1997 a piece that responded to the topic “The Literal Soundtrack of a Day on Earth.” My records don’t show if there was any eventual publication but my copy of the flyer indicates I did extensive research in my private diaries & I wrote “The Track of a Sound of a Day: Today & Over the Years” which I read tonight; I also read 2 new pieces “Are Ewe a Frank Robinson?” & the MFA-bashing “To the consternation…”

Thom Francis jumped in to read the “holiday poem” that began “I don’t have a family tree…” playing on the expected images of trees, wood, & dysfunctional family relationships, etc. 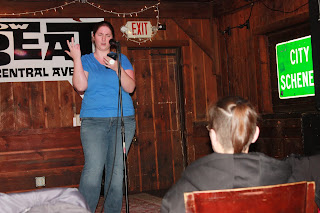 Christa DeMarco, who can often be found here for the open mics, began with a piece inspired by Mary Panza’s recent reading at Dorn’s Space in Gloversville “You’re Damn Right I’m Angry,” then a screed addressed to men who are either “Silent or Violent,” then a very short comment on relationships.