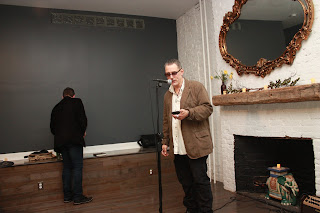 This series started about 2 years ago at O’Brien’s Public House over on 3rd St. in Troy, but, alas, O’Brien’s closed a few months ago, not due to the poetry I assume. Now host R.M. Engelhardt has found a new home for this series at Elixir 16 on 2nd St. Rob got us off to a good start by reading Harry Staley’s tongue-in-cheek poem “Invocation” invoking the “Moose,” then read the lyrics to Tom Waits’ song “The Piano Has Been Drinking.”

First up on the list was me (don’t blame me, it was open) & I read my new poem “Reading Dead Poets Listening to Live Jazz” pretty much written at the Lake George Jazz Festival this year, then the slightly older “Buttons Not Bombs” (to match my shirt). I haven’t seen Tim Lake at a poetry event in years but here he was, perhaps because it was Troy; he a read a couple of older anti-war poems “Contemplation of an Impending War” (2015) & “Homecoming” (2011). James Duncan, who is the co-host of the series, read a poem for Autumn “Life Cycle.” 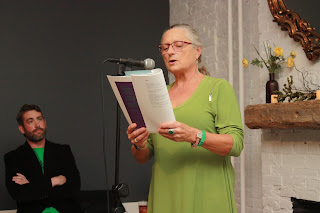 I was also surprised to see Suzanne Rancourt from the North Country here; she read an intriguing, titillating poem that used a litany of panties as ways into memory, then a poem about talking to the leaf clusters in the morning. Rob took a turn but took almost as much time to find his poems on his phone as it took to read them (perhaps it was his tinted glasses), a poem about sharing a smoke with the late writer Jim Harrison (who died of a heart attack from smoking), & one of his signature-style pieces “My Time Spent in Hell” with an old poet. 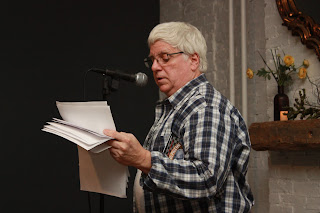 Alan Catlin was the scheduled poet back when O’Brien’s tanked & didn't get a chance to read so he was invited back for the re-birth. Once again Rob had difficulty with his cellphone trying to find Alan’s bio for the introduction. Alan explained that he would be reading poems that he had never read out before tonight, & began with a couple inspired by the work of Charles Simic, one where poems rush in take over the house, another in a museum of dead ideas & emotions. “Frightening Toys” was from a prompt he gave at a writing workshop, then “The Graveyard of the Beach Chairs”, & an elegy for an old guy at the bar Alan once worked at. From his work-in-progress “Hollyweird” based on films he read “Exterminating Angel” & “Look Homeward Angel,” then on to a persona poem about stopping time while drinking, & another bar piece “On Hearing 2 Army Rangers Killed by Friendly Fire.” From the zine Big Scream 57 he read “A Study of Lunar Research Flights” written in the 1980s but still worryingly pertinent. Strangely related in some way (Alan has a knack for linking his poems in readings in quirky ways) was a poem about Sharon Olds being bumped from the news by terrorists bombs. Alan also likes to write poems about photos & photographers & ended tonight an assemblage from a series of grim photos of cholera victims, soldiers being shot, starvation in Biafra & other horror news pictures.

After a break, we returned to the open mic with Kendall Hoeft who read a poem with images of waiting for Spring “Migration of a Hollow Swan,” & the memoir “Poem I Didn’t Write to My Mom.” 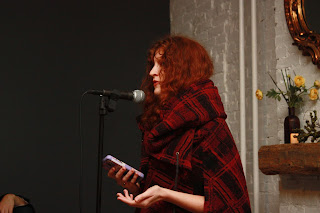 Megan Marohn began with the lyrics to the folk song “Same Old Man,” & continued into a poem, like a journal of her feelings, in response to police shooting of black men in Troy, then a poem titled “The Mermaid.” Schenectadian J. Dalaba/Hex’m Jai read a poem of Gothic images “Conjunctions,” then the sort of Monty Python-esque “Tally-Ho.” James Duncan was back with a poem based on the 1944 Humphrey Bogart film Passage to Marseille. Also reading from his phone tonight was Jeremy Olson with “Borrowed” on the theme of the strangeness of modern romance, the “Small Talk with a Stripper.” Gloria Manthos, also from the North Country, read the just-written “Buyers of Mindfullness Beware,” then a piece summed up in the line “I miss the desert.”

Kennedy Eldon was another voice new to me & read selections from a longer poem in short parts with sex & political undertones, then on to equally brief & sexy selections from a book titled Alphabetarium Penile, which was described in a 2016 notice for Troy Night Out as a “beautiful piece of wok which contains abstract paintings/depictions of penis[es] and the like [?] for each letter of the alphabet” — for everyone who loves a dick (their own or others) & "the like."

The management at Elixir 16 seems more enthusiastic about having poetry in the house than the feeling I got at O’Brien’s so I expect the Troy Poetry Mission to continue here for a while — but then “One never knows, do one?”  For now, last Wednesday of the month, at Elixir 16, 45 Second St., Troy, hosted by R.M. Engelhardt & James Duncan — no time listed on their FaceBook page, but I wouldn’t get there before 7:30PM.
Posted by DWx at 1:46 PM

I have no idea why someone is sharing their "Australian marketing agency" in the previous comments but as usual thanx for coming out Dan, we had a great night! See you in October!

I have no idea why someone is sharing their "Australian marketing agency" in the previous comments but as usual thanx for coming out Dan, we had a great night! See you in October!