While this was the 2nd poetry event I went to this particular Wednesday, this was also the last in what had been an ongoing series of readings/interviews/discussions with individual local writers of note, with the final subject being el presidente himself, Thom Francis. Local poets gathered tonight at an ever-expanding cluster of tables in the back room of the Navona Restaurant. Thom has been the host/interviewer at all the events in the past, but since he was the subject, Mary Panza took on the hosting duties. 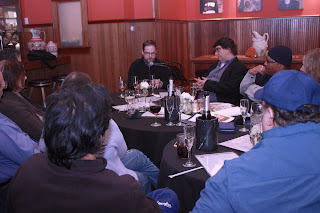 It was a grand gathering of folks who love & encourage the spoken word & the public venues that support the area open mics & readings — not everyone of course, but those who could make it tonight, there are many others out in the community who make these events happen month after month, even week after week.

The poems that Thom read were a sample of the best of his work that we have been hearing, often gritty, personal, but with some surprises about newer poetic projects. He started with “Al” written in 1999, a portrait of a character who came daily to the beer distributor where Thom worked, then the classic “love letter” to his insulin pump “Machine.” “Bar” was a picture of a place where no one cares. A pair of poems about his parents were sad & tender, about their vulnerabilities, but one taking us on into the next generation with his daughter Molly. He also read some poems from a 30/30 project, including a couple inspired by random photographs he had seen, “Wanted for the Weekend” & “Running Away.”

During the obligatory Q&A he cleared up the historical point that he was not a Stephannuci’s, an open mic venue off Wolf Rd. back in the 1990s, & said his first appearance at a poetry open mic was at age 16 in 1994 at the open mic that Mary Panza (!) ran at Border’s, an image that I captured for all time. The questions were varied & by the end even I had no questions because everyone else asked what I would have asked. Some probed Thom on the future & he said we could expect more of what we have seen in the past from this fine fellow who has done so much to promote, support & advance the spoken word scene here in this city of the spoken word. He ended with some “holy water” in his poem “Shower” — & we continued to party & talk.

As Mother Mary (Panza) says, “for all your poetry needs, go to www.AlbanyPoets.com” — see you out & about.
Posted by DWx at 7:30 PM