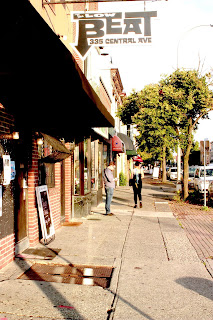 As Mr. Natural once said, What goes around, comes around. Once upon a time AlbanyPoets.com sponsored a monthly open mic & Slam at Valentines on New Scotland Ave. When Valentines was eaten up by Albany Medical Center Nitty Gritty Slam moved to The Low Beat on Central Ave. in early 2014. In the evolution of such events, the Nitty Gritty Slam moved to the 1st & 3rd Tuesdays, other folks took over, then went on to other venues. Tonight, Thom Francis, el presidente of AlbanyPoets, was the host of a new poetry/spoken word series at The Low Beat on the 1st & 3rd Tuesdays, what’s old is new again.

As I walked in what was particularly interesting was that I noticed a couple of local poets who were new to The Low Beat or hadn't been here in a while, as well as about a half dozen younger folk who I hadn’t seen before here, who were shy/reluctant to sign up for the open mic. & so there it was once again, #1 on the sign up sheet, & here I was with a couple poems in my pocket (so to speak), “Waiting for Jacqueline Robinson” & “Buttons Not Bombs” to be precise, to read first.

Then, it was good to see Caroline Bardwell as one of the familiar faces who found their way to this new open mic, & she read the moving poem “If Anger Were a Sculpture” then her obsessively alliterative piece on the 4 seasons. Todd Fabozzi hasn’t been to a poetry open mic in Albany for some time; he talked about his 2 new books, Poems & Antipoems (shades of Nicanor Parra), volumes 1 & 2 which selected poems from his first two books, then a smaller collection of new poems Poems & Antipoems Vol. III, & read us a couple.

Algorhythm also showed up tonight & performed some intense pieces, “Conflict, What Is It?” (in dialect), “Midnight Haunting” & the last untitled piece “one of the last real poets…” even more intense. Tim Verhaegen is always a welcome sight but he picks his venues carefully for those that he feels most comfortable in, consequently hadn’t been here when it was Nitty Gritty Slam, tonight he read a memoir piece “13 Years Old 1974” about watching the “cool guys,” riding his bike with his shirt off, before he realized he was gay. Our host Thom Francis joined in with a poem about his sad/hurt relationship with his father, then another about Monday at work.

The night ended with a couple of new, young poets who, perhaps, were inspired by the open, supportive spirit of the open mic. First was Shannon Spollen, who admitted to being a poetry “virgin,” her 1st time time reading out, her first poem a fantasy in rhyme, then one about praying to the Sea.

Savannah Goodman also braved the stage (it’s not so bad, right?) with a poem written when she was 15, as if she were a sweater.

It was quite a night for this inaugural event, in a string of open mics sponsored by AlbanyPoets.com. Brass Tacks at The Low Beat, 335 Central Ave., Albany, NY — on the 1st & 3rd Tuesdays at 7:30PM, an open mic for poets, perhaps featured poets in the future, but a relaxed event to just come & read from your spiral notebooks, your cellphones, that napkin you just wrote on at the bar. See you there.