This seasonal series started up last month but I missed it. Glad to be back at the Pine Hollow Arboretum for another series, with the Bird, Alan Casline, as our watershed host. 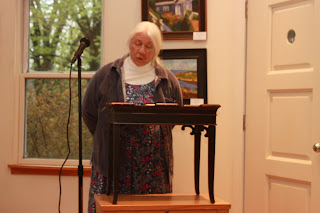 First up for the open mic was Dianne Sefcik who began with a poem filled with rivers, trees & fish, “Looking for America Too” inspired by the work of Michael Robinson (1948 - 2010) Cree artist & poet, then a work-in-progress, an opening ceremony titled “Clear the Way,” & another ceremony poem “Fire Keeper.” Mark O’Brien also read 3 poems, “A Snake Must Have Bit Me,” “The Power of Maintaining Life,” & the poem that got him a check from the Stephen A. DiBiase Poetry Contest, “It is in the Shelter of Each Other that People Live.” I followed with the haibun I contributed to Mark’s Blog, “Last Train to Clarksville,” & then the new poem “The Day God Invented Wine” (that I promptly spilled my glass of wine on). Howard Kogan read a poem, “Old Men Talking,” from his series of poems based in Stephentown, NY, then a poem about the international nature of a beach in Vancouver, BC. 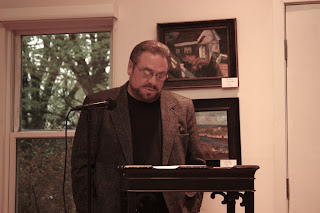 Mike Connor read a couple of descriptive nocturnal poems, “Evening Ramble” & “Night-time,” then a poem titled “May 1st” from his new chapbook, Seasonal Musings. The man-behind-the-trees at Pine Hollow Arboretum, John Abbuhl, read a short essay, “The Weakness Within Politics” from his on-going series, The Philosophy of Reality. Tom Corrado read about “what I talk about when I talk about poetry” in his series of “Screen Dumps” #360 & #361. Alan Casline read 2 poems, “Moving Roots” & “Red the Cow” that had been published in an anthology River of Dreams. Philomena Moriarty began with her newest poem, an exercise titled “The Spaces Between Us,” then a poem filled with ice, mud & snow “The Walk,” & a rediscovered poem for a friend who died of liver cancer “Parcels, for Jeanne.” Peter Boudreaux read a timely poem, given today’s date, “Cinco de Mayo,” musings while working in a garden. 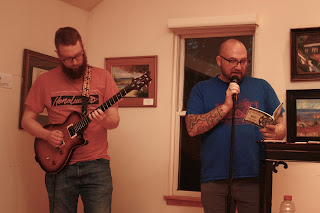 The featured poet was Adam Tedesco, the founding editor of the new poetics journal Reality Beach. He read the entirety of his new chapbook, Ablaza (Lithic Press, 2017), a poem written for the first guy with whom he ever smoked a joint. It is a solidly first person narrative (of sorts) full of “I” & “we.” He was accompanied by James Matlock on guitar, whose dreamy repetitions fit easily behind Adam’s low-key, elegaic reading, filled with memory, musings & pot-soaked links & leaps, at a slow, stoner’s pace.

Poets of Earth, Water, Tree & Sky continues, sometimes on the first Friday of the month, sometimes on the second Friday, through November, 6:30 PM (or come early for the pot-luck — no, not that kind of pot — dinner), at the Pine Hollow Arboretum, 16 Maple Ave., Slingerlands, NY.
Posted by DWx at 7:47 PM