The sign-up for the open mic at Caffè Lena starts at 7:00, but when I got there about 7:15 the list had gone to a 2nd page so, as an act of mercy to those who be still there at the end, I didn’t sign up. Carol later said there were 32 on the list. The room was packed but there were available seats at friendly tables. At first I thought they were all there for featured poet Bernadette Mayer, benefitting the 2nd feature, Kate McNairy, by giving her a great audience too, & indeed that was some of it. But it turned out an English teacher from the high school brought a flock of her students to read in the open mic which accounted for almost a quarter of the open mic list. 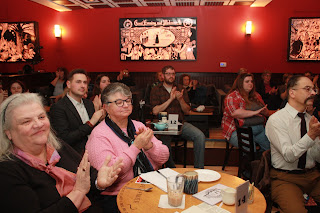 Our host, Carol Graser, started off the night with Jane Hirshfeld’s political poem “On the 5th Day,” then limited the open mic readers to 1 poem. Barbara Garro usually manages to get herself to the end of the list, but tonight was first, with a poem about a horse from what she described as “the second book of the Barbara Garro series.” Nicola Marae Allain read a tale about a bird finding its way back to Tahiti. Joe Bruchac followed with a piece titled “7 Samurai Revisited.” Kat’s piece was about trying to be humble & not drowned in issues, while Margaret Bryant read about the new music at weddings, missing the standards from her generation. Sally Rhoades read a poem about “the last moonshine on the snow.” Dan Wohlmeiler read a humorous rap piece, “The Nerd Life.” You can find the piece that Mark O’Brien read about his 1st grandchild here on his blog. 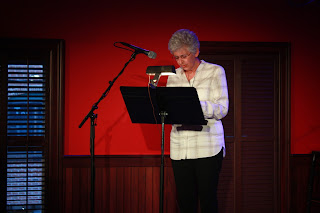 The first of the night’s 2 featured poets was Kate McNairy, who read from both her books from Finishing Line Press, the recently issued Light to Light, & her 2014 June Bug. Her poems are short, many less than half a page, & she read them without introductions, sometimes rushing through them, asking us to hold applause to the end. While many of her poems are based in Nature, there are the occasional poems about drinking bourbon, or rum tea, & some tender & often off-beat love/sex poems. When read, some of the poems go by too fast so it is nice to have her books to return to them later. 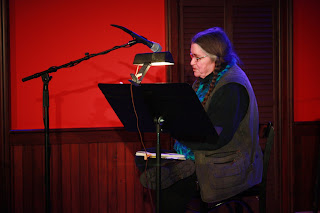 I have been at some open mics & other readings recently where the poet says “this is a poem from Bernadette Mayer’s workshop…” Even I have a couple like that. Bernadette began her reading with a timely poem from her 2005 New Directions collection Scarlet Tanager the feisty “To A Politician.” She also read from a collaboration with Laynie Browne from a book about bees, & from the 2016 Works & Days. She also has a “rap” poem, “Words that Rhyme with Disease," & read a poem written on her 70th birthday, “Walking Like a Robin.” “Soul Sermon” is a long, free-association ramble, while “The Great Outdoors” was about what the title says, as was “Tassawassa Blues” playing on “blue.”

At the break all the “professors” left, although most of the open mic poets were yet to read, an all-too-frequent happening here. Carol Graser continued the open mic with her hopeful political poem “Women March on Washington All Over the World.” Alan Casline also read a political poem, “At the Far End” with it’s refrain “I had no idea…”

Philip Good read a poem reacting to the recent film Paterson “Thanks For Making the Film Better, Ron Padgett.” Anna Feldstein read 2 poems, because she is a volunteer here & was in the kitchen & didn't hear when Carol laid down the “one-poem” rule. Kim Yasick did a love poem from memory “Like the Sea.” Serena’s poem titled “Sleeping with Books Instead” was an exploration of what “Serena” means. Julia Kelly, a high school senior read, a poem inspired by Bob Dylan’s song “My Back Pages.” 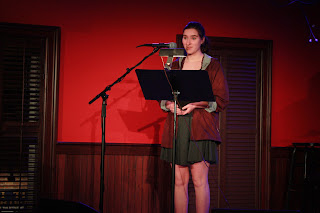 Sophie Kelly (Julia’s sister) did a piece form memory about the perception of her self “Entwined.” Henry’s poem about “what Narcissus means to me” was inspired by a poem by Tony Hoagland. Max read a bit of wordplay “The Breaks.” Bridget Gallagher was the high school English teacher who had not only brought her students here tonight, but it seems inspired them as well, read a Slam-style piece “A Belly-Scratcher in the Morning.” Thomas Dimopoulos read an elegy about the 1982 death of the ground-breaking writer, Lester Bangs, who taught the world how to write about rock’n’roll. Nancy DeNofio read a love poem “The Night Before.” Carol Shipstar’s poem was titled “Moonlight.” Rodney Parrott read from his daily Tweets about Donald Trump. Anthony Bernini’s poem was set in Florida on “Jensen Beach.” 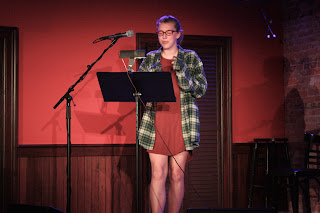 This was Julia McDonald’s first reading & she enthralled us with “Prison of Convenience” about using public bathrooms. On Julie Lomoe’s 44th wedding anniversary she read a poem about her obsession with jigsaw puzzles, both real & digital. Rob Smith, who was also celebrating the aforementioned anniversary, read a faux memoir of San Francisco by a heteronym Ember Stokes. W.D. Clarke read a memoir in rhyme “With a Mother’s Love at Breakfast.” Phana (or was it Chana?) read a piece about the things she will tell her daughter. The final reader, Suzanne Margano, ended the night quietly with a descriptive sonnet.

While not always as crowded as tonight, this open mic is held on the 1st Wednesday of each month at the refurbished Caffè Lena, still on Phila St. in Saratoga Springs, NY, 7:30PM start, so get there early & sign up.