As a young, red-haired student David Kirschenbaum was one of the poets who frequented the QE2 Open Mic on the last Monday of each month back in the late 1980s & 1990s. He went on to form BOOG Literature, a poetic umbrella group published small-sized poetry chapbooks, & established a long-running series of readings in New York City, series that include music, book fairs as well as readings. David’s information for 10.5 states “It will feature 51 poets, 17 musical acts, 3 poet theater plays, 2 poets in conversation with one another, & a d.a. levy lives press” from Friday February 17, through Sunday February 19. David has graciously included me in these festivals in the past & invited me again to read on Saturday, February 18 at Unnameable Books in Brooklyn. 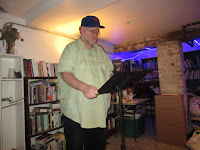 I spent the afternoon in the basement of the bookstore where the readings were held, on a beautiful walking-around afternoon in Brooklyn, & heard about 16 poets & musicians performing their work, each poet getting 10 to 15 minutes to read. The intros were shared by David & one of his poetry editors, Jackie Clark.

As the late crowd was gathering the Megan DiBello read a couple long pieces which were, to steal one of her lines, a “biography” of her last week. Sam Jablon’s 4 poems, with titles like “Beautiful Nothing” & “Everything Dies,” used repetition well in their short spaces. 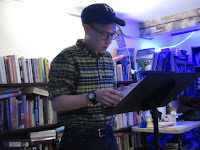 The poetry scene in Philadelphia was represented well by the next 2 poets. Davy Knittle began by talking about still another Philly poet, Gil Ott (1950 - 2004)  & included “Traffic” a long poem that seemed to be about itself that was inspired by reading Ott’s work. Thomas Devaney was the other Philly poet, he also spoke of Ott, read some Winter poems, including one an urban piece “The Blue Stoop” that Ott had once described as Devaney’s signature poem. Sarah Bartlett was here from Portland, OR, read from her phone selections from her book Sometimes We Walk With Our Nails Out (Subito, 2016); one line I noted was “there is no graveyard for desire.” 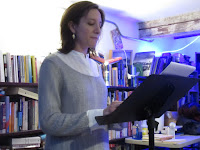 Alyson Pomerantz apologized for reading prose, a funny, touching (pun intended) memoir in 3 parts, “A Meditation on Masturbation,” including discussions on the topic with her aunt & with her mother. Gracie Leavitt’s poems were short, with lots of wordplay & randomness, as if they written in small, pocket notebooks. It was my turn & I began with selections from Gloucester Notes, then on to a sampling of sections from Inauguration Raga, followed by “When Donald Trump Farts;” & to end on a happy note, I read a couple from the series “What Makes America Great” #14 & #35. Katy Lederer’s poems explored the use of scientific language, both real & made-up, in poetry, from her new collection "The Engineers," & from poems in Colorado Review, as well as some poems from the 6x6 series (#35, February 2017) from Ugly Duckling Presse.

A couple of scheduled performers had not yet shown up & it was time for a break so I headed out to Vanderbilt Ave., found a most pleasant watering hole, the Breeder Bar, for a beer, then returned to reminisce with David about “the old days” in the Albany poetry scene, & some of its (many) characters.

Back to the performers, Emmerson Pierson did a set with her acoustic guitar of songs she had written as well as a cover. 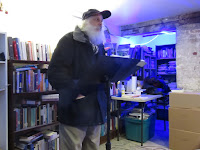 She was followed by Sparrow in his stocking feet who did his usual Sparrow act of short pieces, some just brief sentences, aphorisms, often just a stoner’s take on a common phrase, ‘though he did read a “sonnet” titled Not a Poet.”

One of the hallmarks of the Boog City Festivals is the celebration of “renegade presses,” the small-small presses that keep poetry of the streets & experimenters alive, titled “d.a. levy lives,” honoring the poet & small press publisher who flourished in Cleveland, OH, d. a. levy (1942 - 1968).  Today’s honored press was Argos Books. 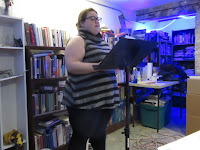 Samantha Zighelboim was the first from this group with a reading from a forthcoming collection The Fat Sonnets, intense, personal poems about struggling with weight, many poems with funny titles, including some from a series of 14 word “poems on a diet.” 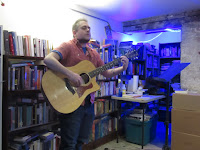 Isaac Fornarola did a set of songs with his guitar, what he called “folk songs” that were mostly his own compositions, played with a skillful use of finger-picking. 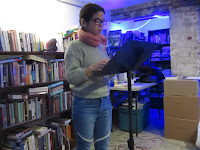 Jennifer Hayashida gave what was perhaps the most unusual reading of the afternoon, reading from her translation of the Swedish poet Athena Farrokhzad’s White Blight (Argos Books, 2015), in both Swedish & in English, the poem a family memoir/narrative. Marina Blitshteyn has a book forthcoming from Argos, Two Hunters; today she read new pieces, a surreal narrative, & other pieces, including one titled “King Tut’s Space Knife.” 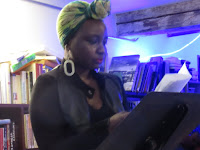 Amber Atiya’s book The Fierce Bums of Doo-wop is available from Argos Books. She dedicated her reading today to her nephews, poems of death, & of King Tut, once again. Isaac Fornarola returned for another set, surprising me by announcing that he was trans-gender, that his songs in this set were ones written before he transitioned.

The festival, which had begun Friday night, continued on Saturday evening & on Sunday. But my time was limited in the City so I headed out to wander the streets of the Village & have dinner before heading back on the train to Albany.
Posted by DWx at 10:20 PM