This was held at the Restaurant Navona on New Scotland Ave., Albany, NY. 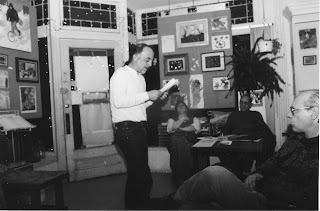 Before I go to these events I like to find out when I first saw the poet who is the subject of this showcase/reading series. The easiest way to do this is to go through the photos in “the world’s largest collection of photos of unknown poets,” from back before the days of smart phone cameras when I was often the only photographer in the room. & there it was -- a photo of Mike Jurkovic at the A.I.R. Studio in Kingston, NY taken on February 15, 1997, or, as the Beatles once sang, “it was 20 years ago today…”

As is the custom here, the evening began with a reading by the honored poet, who began appropriately enough with a poem looking at language as dangerous. A couple poems on mortality included “Gravity Gets Us All,” & “Breathing Issue” from a hospital visit. Mike can be a soapbox poet (in the best sense) & read poems about the new administration in Washington, including “Cloud Land,” “I’m the Next Guy” (the one who wipes the toilet seats in Trump Tower), & a poem of revolt beginning “I can’t control myself these days…” Of course there was a poem for his wife, “Gather Here,” & one composed of lines that never made it in to poems, “Cleaning House,” & others titled “Still Live with Magnolias,” “Device,” “Passing Showers” (on extinctions), “Cheering the Ponies with God,” & “Cold Shot.” He included a poem about him, “Bored” written by Guy Reed, that sounded as if he could have written it himself, then ended with “Poetic Justice,” about Poet Laureate Billy Collins some years ago looking for a seat at the Woodstock Poetry Festival. 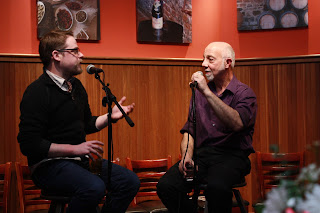 The reading was followed by an “interrogation,” beginning with Thom Francis’s customary question, “Why did you start writing poetry?” To which Mike answered that he was too lazy to become a musician. This led to a discussion of Mike’s wife Emily’s role in creating “Gary Murrow," & the 2003 WordFest “Psycho Cluster Fuck” — it was therapy. Mike then went on to describe the rise & demise of the reading series at the Howland Cultural Center in Beacon, & the move of CAPS to New Paltz.

To a question about how today is different from 20 years ago, Mike said that what’s changed is technology, that now the poetry scene is more active than ever. Nick Bisanz talked about growing up in the mid-Hudson area, about following Mike’s band & it’s influence upon him & his friends, about seeing them in the 1980’s at the 8th Step in Albany, & even quoted lyrics from one of the band’s song. In response to a question from Mary Panza Mike responded that “Mary taught me how to curse in poetry.”

Stay in touch with AlbanyPoets.com to find out about the next Albany Poets Presents.