It was really no choice at all — the TV debate between Trump & Clinton, or poetry at McGeary’s — duh! But it seems some other poets made the other choice (‘though at least 1 was reportedly sighted in Portugal). But there were some poets on the sign-up sheet & even some spectator souls who wandered in & stayed. Our host, Mary Panza, said we could read up to 3 poems if we wanted.

I was up first to read “Ordering Lunch” (from boundless abodes of Albany), “I’m Doing my Best to Preserve the Adirondacks” &, for the night, “When Donald Trump Farts.” 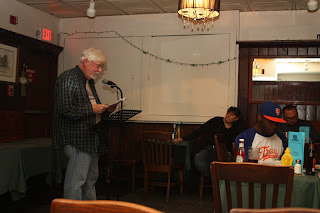 The 3 poems that Bob Sharkey read are among my favorites among his work, “Scarey People,” “Things,” & “There But for Fortune” (re-written fortune cookies). Adam Tedesco read a fictional narrative, “Bales of Hay,” by his friend Dan Majors, then selections from his new chapbook of his long poem Heart Sutra, in which “my heart” is a character. 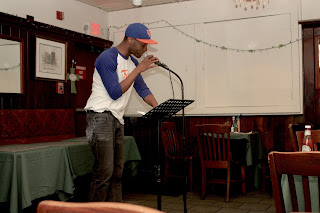 Tonight’s featured poet, Ian Macks, did what any good featured poet does: brought a bunch of friends to his reading. He began with a ruminative poem started by his father’s hug. He said he had published a chapbook, but I didn’t catch the title, & he said he couldn’t find a copy (but an instantaneous internet search later revealed a chapbook titled A Loss and Gain of Comfort from Bottlecap Press). He read “Now This” about a poem, “Violations Volition” about parking tickets, & the first of urban poems, as was “Manic Machines.” “Never Regret Never Forget” was a political piece on the anniversary of 9/11, & he ended with a love poem “Half-Hearted.” But not quite yet — his poems were short & he was being conscientious about not reading too long, so Mary called him back for an encore, which he read from his phone, beginning with more urban dystopia, then a poem exploring doubt, then another on disappointed love.

There were just 2 open mic poets left, both former features here. J.L. Weeks did her poems, untitled, from memory, the first a portrait of one trapped in a room while the birds are free, the 2nd, a hate rant about the “umbrella man” — her use of rhyme relaxed, unforced. Karen Fabiane did 3 of her breathless, mumbled poems, the 1st “kind of new” with an undercurrent of sex “Unsing,” then one inspired & titled from an Alison Bechdel cartoon “Andalusian Girls,” then visited by the dead in “Makes a Great Shake.”

The millions of people who watched the debate tonight would have done better to have heard these poets. But then there are more last Mondays coming up for Poets Speak Loud! at McGeary’s on Sheridan Square in Albany, NY. Check AlbanyPoets.com for details.
Posted by DWx at 7:51 PM