Back up to Schenectady on the 2nd Wednesday for this series with our host Catherine Norr & tonight’s featured poet Leslie Neustadt but there were a bunch of eager folks signed up for the open mic.

First up was Richard Jaren with a 2-part poem “Promises” that can’t be kept. Carolee Bennett was back out again to an open mic to reprise the sad & tender poem she read Sunday at the Arts Center in Troy “Let It Be.” 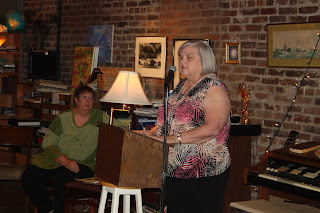 Ginny Folger read a variation on a nursery rhyme titled “3 Misses Muffets” then a piece on aging & actuarial tables “16 Minus 6.” That must have started something because Judith Prest read a poem titled “What Gets Us In The End” & then funny versions of what all poets are familiar with “Rejection Letters.” Barbara Traynor continued the aging theme with a poem titled “Enough.” Donna Dakota read a funny, clever narrative piece “Standing on the Porch of the World’s Perfect Poet.” Taylor Pangburn’s poem “Rehab” was about attending a staff meeting. 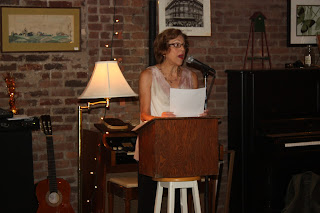 Leslie Neustadt, tonight’s featured poet, began with a signature poem, “Mishmash” reveling in her Jewish culture, from her book Bearing Fruit (Spirit Wind Books, 2014), & returned throughout her reading to other poems from this collection, including “Bitter Greens,” “Sand Hogs,” “Child of My Child,” & the revealing “Teshuvah” about abuse by her father & her lifetime of healing. She also read some new, “raw” (as she said), poems from classes & workshops, poems from dreams, on disease (“Incurable”), poems about her mother-in-law, her mother & from a new series of found poems from the pages of the New York Times. It’s hard to pin down this eclectic poet.

Catherine Norr returned us after a break to the open mic with one of her own poems, paying tribute to Leslie, “Matzoh” about asking the questions at Passover. 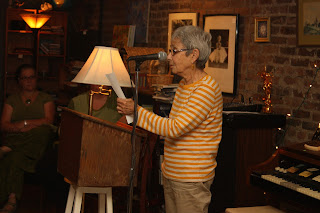 The long-time Schenectady poet Esther Willison made a rare appearance & read “My Screen Door” (as a metaphor of her life) then a poem in praise of Nature in the style of the poet Gerard Manley Hopkins. The more ubiquitous Schenectady poet, Alan Catlin, took us in unlikely directions in his poem “Haydn at 4 AM,” then from series of memories of that day “Remembering Working on 9/11.” I followed with my poem “Song of the Tallest Tower” written between the 1993 World Trade Center bombing & 2001. Don Levy is not a sports fan but admitted to like watching young men leaping off cliffs in his poem “Divers,” then explained a bit of gay culture in “Bear Facts” (“bears” are large-sized men, like Don). 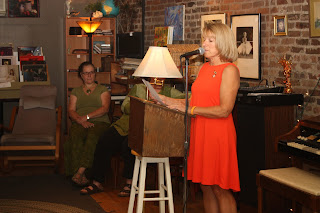 Cynthia Finnegan introduced herself by saying she was “not a poet” that what she was reading was “just words” that she wrote on the death of her son, like a letter in rhyme — sometimes “just words” are a poem. Samson Dikeman, who in the past was frequently at open mics in Albany, read a descriptive piece, “Breakwall,” about watching couples at Lake Ontario. Malcolm Willison’s first poem was also descriptive, #11 from his series about Elizabeth Bishop’s house in Key West “Demolition by Neglect,” then a sober “Forecast” of the end of life on Earth. 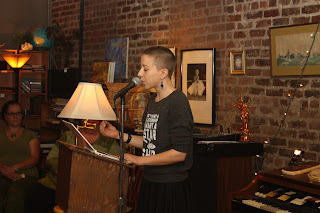 Shae Fitzgerald’s love poem “Enough, Enough, Enough” was filled with images of the heart, while in her poem “Blood Moon” she became one with all the others looking at the Moon. Candice Arney began with a quote about faith, then read 2 poems also praising faith. Tzipporah Harris read a poem about vacation (written at a women’s writing workshop) “When My She is My He.” J.J. Johnson read 2 recent poems “about hatred” he said, “Planting Dandelions” & ripped-straight-from-the-News “Deaf, Dumb & Deplorable.” Carol Graser put an amusing cap on the night with a poem as a reality TV show “What If Emily Dickinson.”

The open mic at Arthur’s Market in the Stockade Section of Schenectady takes place each 2nd Wednesday of the month, starting at 7:30PM, with a featured poet & an open mic for the rest of us, with our host the affable & sometimes musical Catherine Norr.
Posted by DWx at 8:21 PM