The next to last poetry event of February this year with much of the usual poetry crowd here, for featured poet Karen Fabiane.  Edie Abrams was our genial host for the open mic.

First up was me, with 2 poems on death & dying, my new “Birthday Poem 2016” & the older “On Reading the Tibetan Book of the Dead” complete with bells & whistles.  Our host, Edie Abrams, in control of the list slipped herself in next to read a poem pondering the effects of shocking the brain for mental illness.  Joe Krausman read his 2 poems from 2, the anthology of writers who have read at the 2nd Sunday @ 2 series at the Arts Center in Troy, published by the new Riverside Community Press, “My Mother’s Wedding Dress” & Marilyn Monroe’s Dress.”

Dennis Sullivan’s poem, a conversation with clerics, turned the cliché phrase “La plus ca change…” inside out, then a poem for Gregory Corso “The Sweet & Endless Season.”  Paul Amidon’s 2 poems delved into the past, “Dog & Cat” & “Ida & Len.”  Joan Gran, by special request from Dennis Sullivan, read a piece she had read here in November about a conversation with her grandson “The Unexpected Visit."

Kathleen O’Brien read 2 poems, “Grief Relived on Hearing of a Sudden Death” & “A Dollar in a Diner.”  Both of Tim Verhaegen’s poems were about the beach at East Hampton Long Island, “Gardiner’s Bay” & the long 2-part “Wiborg Beach.”  Brian Dorn’s poem “Tears of Lake George” was also about water & death.  Tom Corrado is up to #272 with his “Screen Dumps,” this one incorporating chess, pop culture & a “mute” section a la John Cage. 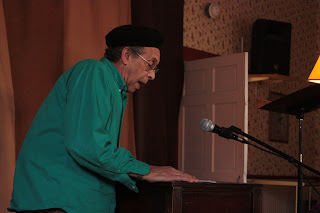 Peter Boudreaux, from up in the historic hill towns, read “My Rent War” about some archeology digging with a friend.  All the poets so far had stood at the mic but Mark O’Brien sat on the problematic stool to read a characteristically Irish-nostalgic poem about his ancestors coming to America, then a poem based on Deuteronomy 6:7 the poem marked up by fellow poets Dennis Sullivan & Alan Casline.  Bob Harlow had a mini-feature with 3 long pieces about his 3 wives, “Paper Swan Song,” one I think was titled “Lake McBride for 3, or How I Learned my Wife was a Lesbian,” & third long, self-indulgent piece whose title I didn’t catch.

Alan Casline began with a seasonal poem “With a Crescent Moon,” an older piece “The Possessive Plural,” & a kenning poem based on the nursery rhyme “The Cow Jumped over the Moon.”  Jonathan Bright showed up for the 1st time (I think) with some interesting work, a poem on rage & its source in animals, a piece on laws versus will titled “Neal is Trying to Write a Love Note” & something he said was based on the Anglo-Saxon concept of wird. 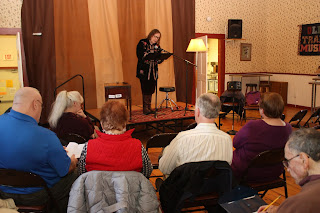 Karen Fabiane was the featured poet today & she read from both of her books.  First from Dancing Bears (Bright Hill Press, 2011), “The Calm Time,” “Oceans Everywhere,” the narrative “The Woman Upstairs,” “There Was a Very Smooth Aspect to Her” (that Dennis asked she read again, & “Rain Today.”  Then from Seeing You Again (Grey Book Press, 2014) “Orphan,” “I Fucked St. Joan,” “Begone,” & the title poem.  Karen’s work is intricate, often with with leaps that make them a challenge on first hearing, but benefit from multiple readings.

Sunday Four Poetry is (usually) on the 4th Sunday of most months at 3PM at the Old Songs Community Center in Voorheesville, NY.  However, in spite of what you might read on their flyer there will be no reading in April, since it is Easter that Sunday, & you know how pissed the Easter bunny can get when others take over her show.