If this wasn’t a Leap Year this reading would have been last week, but here we were on another last Monday in the back room at McGeary’s, with Mary Panza keeping order & instigating chaos.

I was first up on the sign-up sheet with 2 recent poems, “Birthday Poem 2016” & the lesson for poets “Metaphor.” Sylvia Barnard started off with her poem titled “The Deer at Church,” then on to a piece written just today about our ancestral cells in our body having a family reunion. 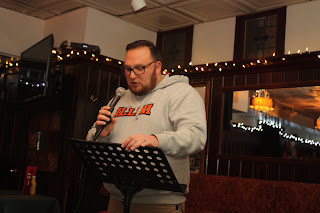 Adam Tedesco read 2 poems from his chapbook mss. “Moon Over My Jammies,” one of which seemed to have something to do with the actor Powers Boothe. Carrie Czwakiel said she has know the featured poet for a number of years, & then introduced one of the night’s major themes, coming to terms with being a victim of spousal abuse, which was the topic of her poem “No More,” then she read part of an essay she submitted for a job working with abused wives. 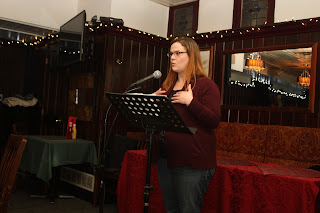 & appropriately enough the featured poet was up next — Randee Renzi who said this was her first featured reading anywhere. Her pieces were about relationships, good & bad, & how one deals with them. The first piece was on sex & interestingly titled “Trout,” then an untitled screed to a rival for her husband. An untitled piece was about falling into love & sex, struggling with the relationship. “Catharsis” was her tour-de-force, a long piece performed from memory, again on relationship, finding the balance between being separate, but also needing someone to lean on. My hope is that we get to hear more of Randee’s work in the future as she moves from poetry as therapy into poetry as art.

Back to the open mic another new voice was Joshua Bauscher who performed both his pieces in at a fast, slam-style cadence, the first titled “Ode to Women” (or birth, it seemed), & the free-style “I Am All One.” On the opposite end of the experience spectrum was R.M. Engelhardt who announced a new website, The Bones of Our Existence, which is set to roll out later this year, & read 2 poems from it, “Forget the Dust” & one titled “Primitive” on one of his perennial themes: the Poet (& “this is not a poem”). Tim Verhaegen read a new &, as he termed it, “cranky” poem “Long Island Neighborhood,” then the contrasting 2-part “Wiborg Beach.” 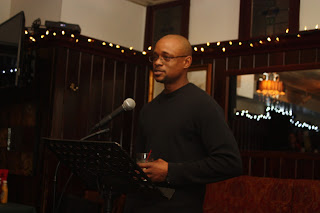 Tyrone Hill had come to support his friend Randee, did both of his pieces from memory, the first a letter to his son from prison, then a love poem to Randee. George was also supporting Randee, read the funny “Time” a poem in "big" words. Karen Fabiane read a poem each from her 2 books, “How I Walked” & “Dripping Syndetic Tripiness.” 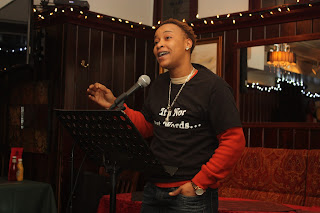 The Poet Essence made a rare appearance here with 2 performance pieces, “Mosaic Illusions” & an emancipation piece “I’m Not Mad at You” both on the evening’s theme of love & relationships & abuse.

Even without adding an extra day to the month, Poets Speak Loud! happens each last Monday of the month at McGeary’s on Clinton Square in Albany, NY, about 7:30, 8:00 with a featured reader & an open mic for the rest of us — check out the calendar on AlbanyPoets.com.
Posted by DWx at 10:04 AM