This was a special reading to celebrate Pride month held at the Fulton Street Gallery in Troy, NY, organized by Nancy Klepsch, our host & one of the readers. A great setting for a reading with a work by Harold Lohner as a backdrop for the reading & the gallery filled with work by other regional & national artists on display for Pride Month. 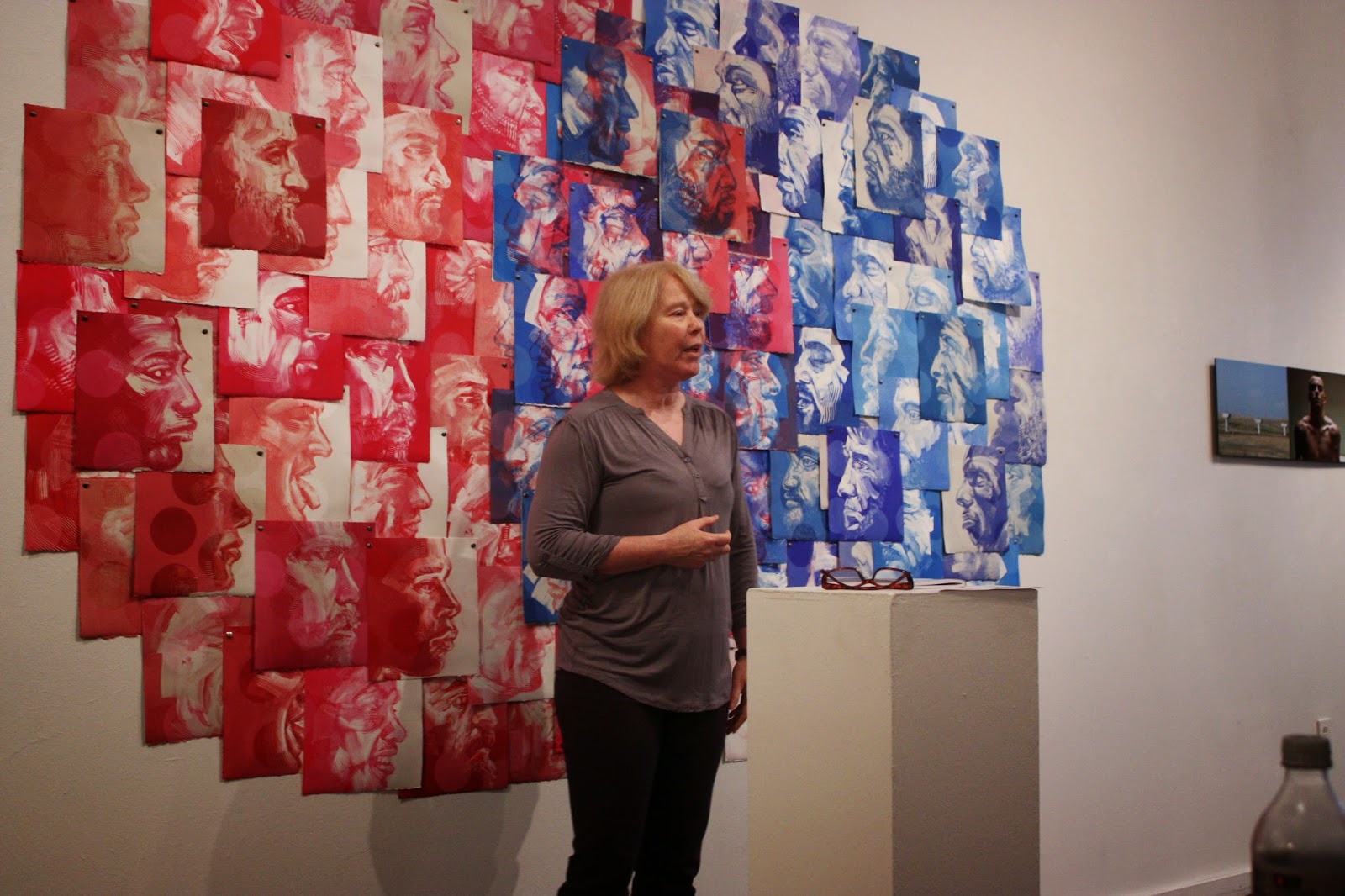 Elizabeth Gordon began, appropriately enough, reciting one of her Slam poems, “To the Guy Holding the Jesus Hates Fags Sign,” (which is included in her recently published book Love Cohoes) then another Slam piece, the nostalgic love poem “I Do.” 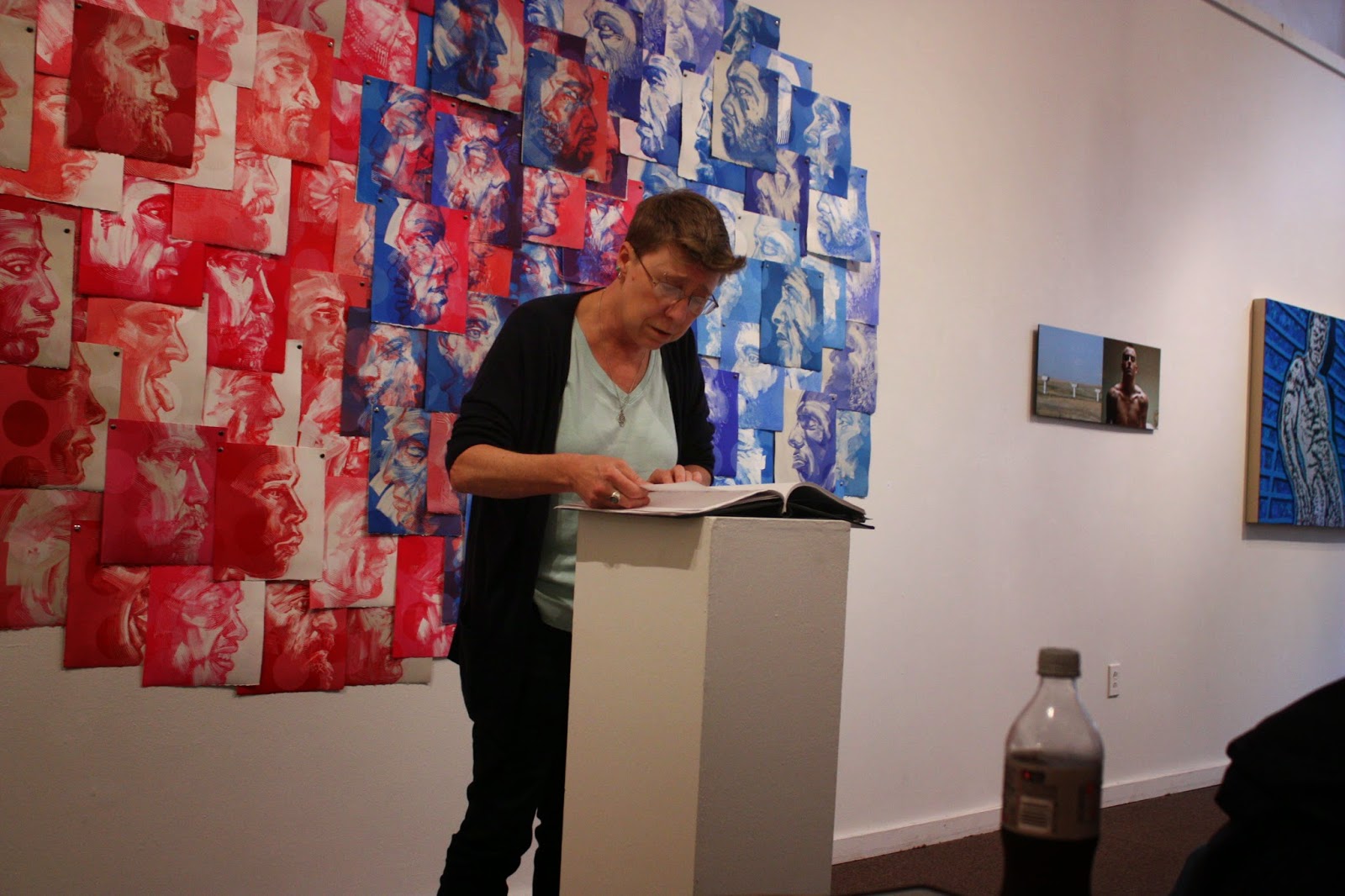 Jil Hanifan also did 2 extended pieces, “Sappho Dreams She was Reborn in the 21st Century,” a 4-part piece that integrates lines from Sappho with her own lines, then she read a ghazal love poem beginning “She changes everything she touches…” based on an old Wiccan prayer & styled like a medieval organum. 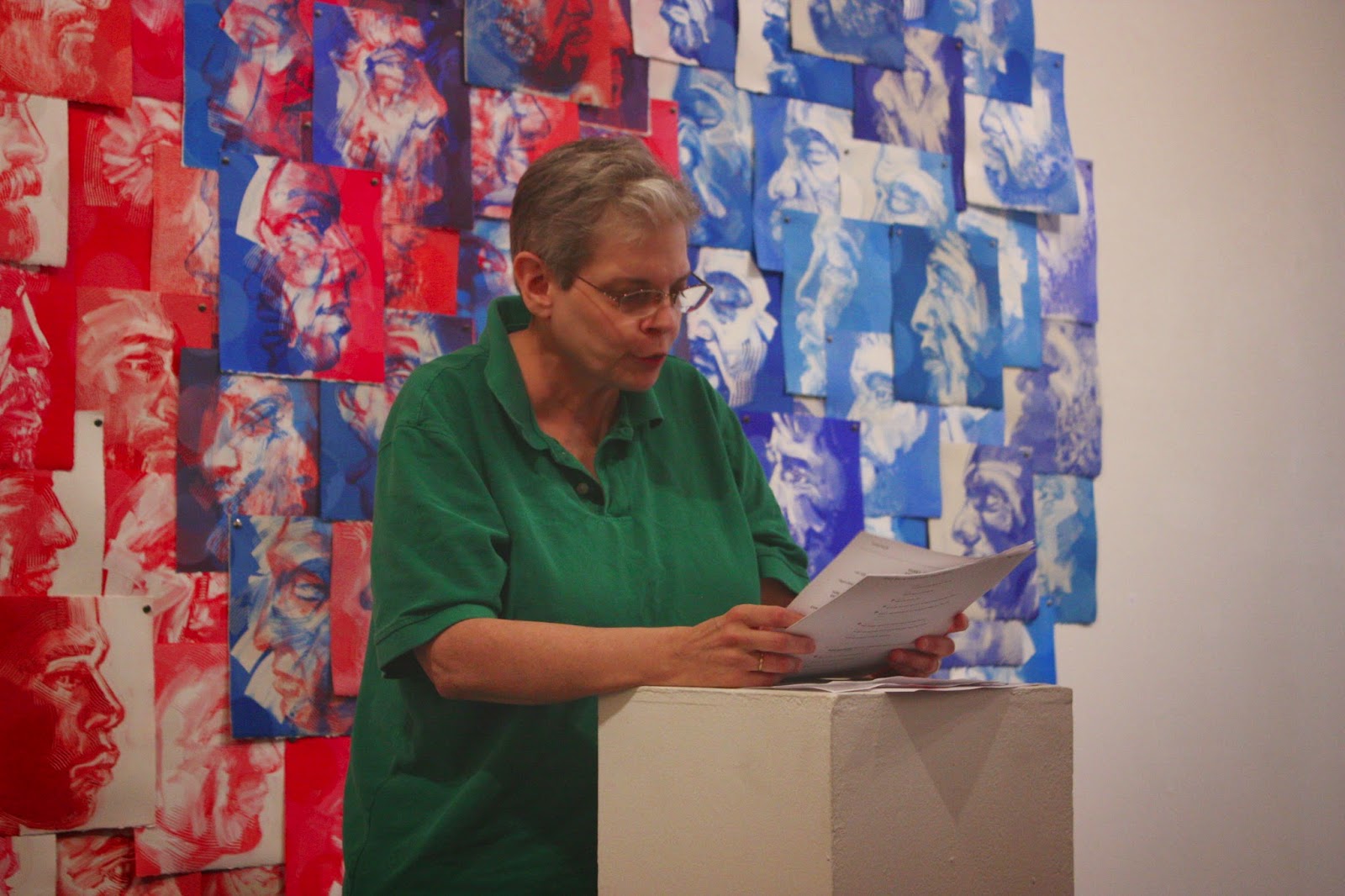 Carol H. Jewell noted that her brother had died 6 years ago this date, read “This is Not the Story” then on to a poem written after a reading at Don Levy’s open mic at the Pride Center in Albany, & an elegy considering the after-life “Late December 2013.” She continued with a short piece in response to the death of Pete Seeger, another titled “The Sound of Her Voice,” then a poem based on an ad at the University by someone looking for a mentor, & she ended with the tender love poem, “Villanelle for Becky.” 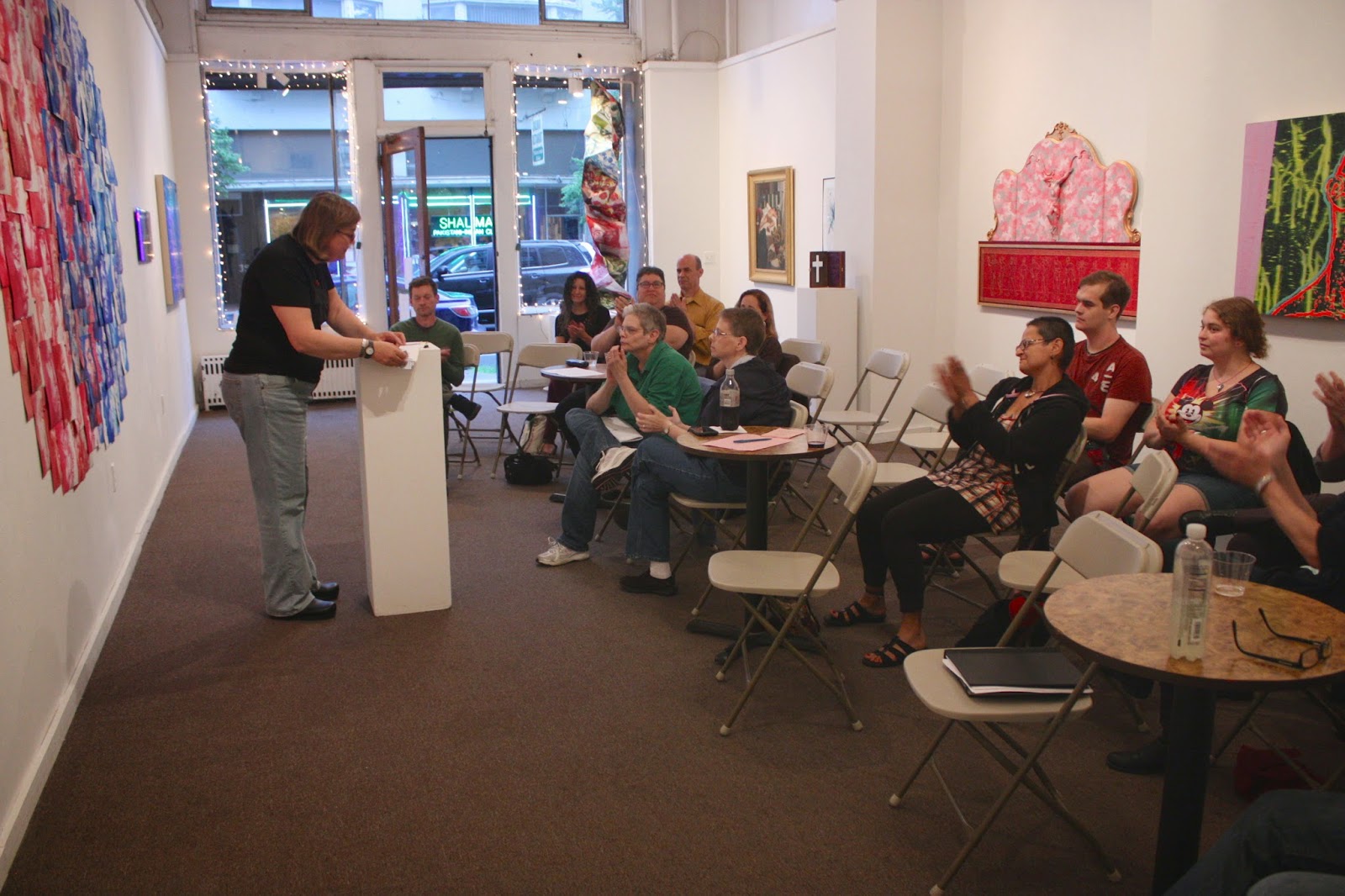 Nancy Klepsch is my co-host at the 2nd Sunday at 2 open mic at the Arts Center of the Capital Region so I hear each month the new poems she has written, & until I can get her collected works from the public library it’s always good to hear them again. She began with an old poem that uses found language from Patti Smith “Invocation,” then a poem reacting to a Robert Frost poem, “The Queer Horse.” “The LGBTQ, LMNOP in Me” was a statement fitting the spirit of the reading, then to a tribute to the Blues, “B.B.’s in the House.” She included a poem about the AIDS epidemic, “I Wish You Had Lost Your Boarding Pass,” a more tender piece written in P-town “Beach Head,” & ended with the anthem “We Need an Army of Harvey’s” (i.e., Harvey Milk), but as Jil piped up “& Nancys!” 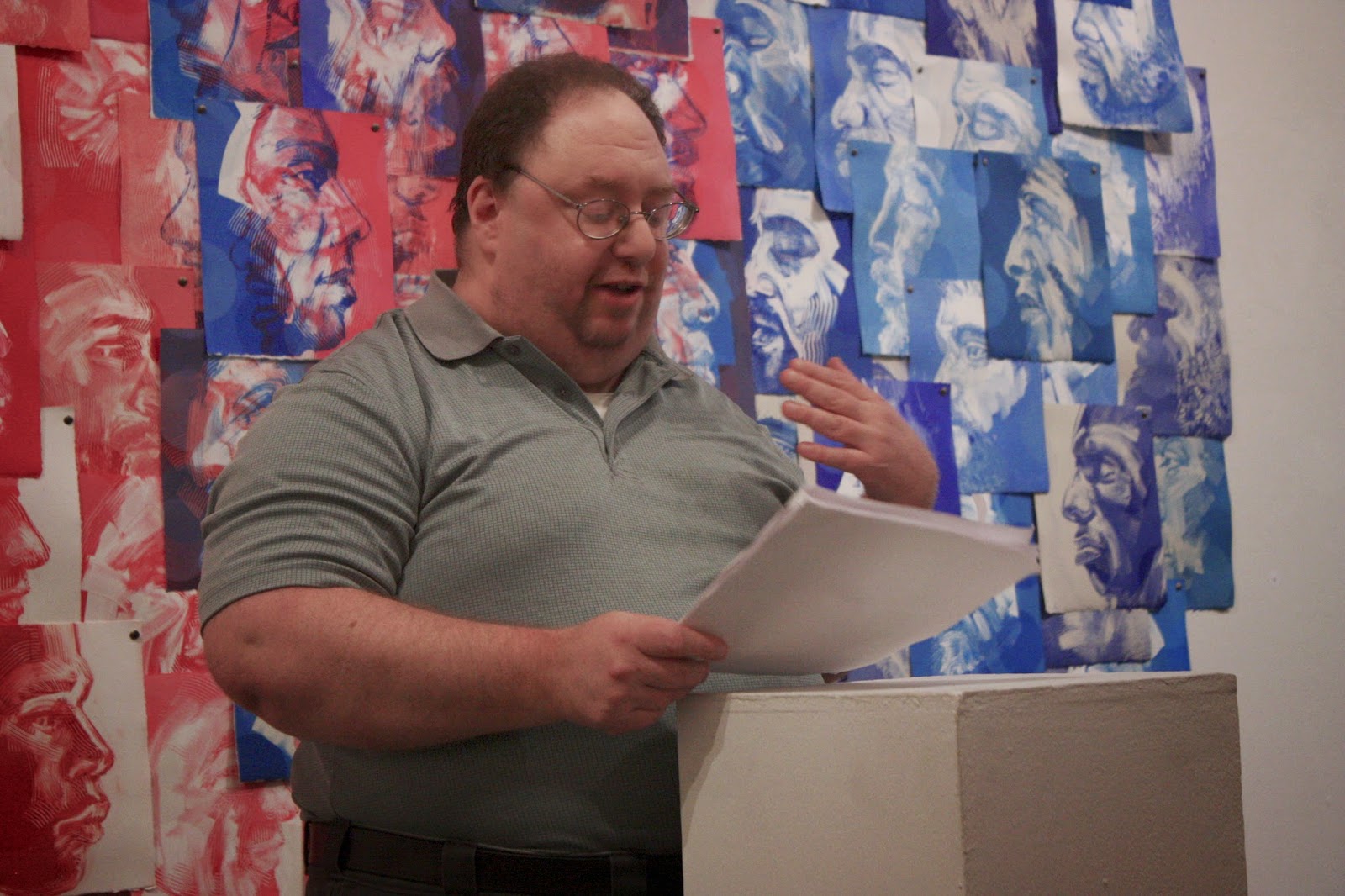 Don Levy had is own (surprise!) bouquet of gay poems, the memoir of becoming gay “Me & Anita,” then a couple of social/news commentaries that are his signature “Bait House & Switch” (about a restaurant in Texas that refused to serve gay folks), & “It Was Only a Kiss.” He ended with a tribute to an Albany friend who died tragically being struck by a car on Central Ave. “Frank.”

& if all that was not fabulous enough, on to a brief open mic. Avery pleaded that “It is Time” to remove identities, to be one people. Bob Sharkey read the famous Lana Turner poem from Frank O’Hara’s Lunch Poems, then a poem on 40+ years of marriage “40 Years In.” Miss S. read an eco-poem on fracking “The Rape of Our Mother.” Emily Gonzalez’s poem “Exile” reacted both to the word “exile” & a poem about the ocean by Bob Sharkey. Maria Diotte ended the open mic noting that today would have been Anne Frank’s 85th birthday, then read a relationship poem “Reflections.”

A good evening of poems celebrating who we all are, no matter what labels we attach to ourselves. Tonight we were all poets, no adjectives needed.
Posted by DWx at 9:52 PM