The series is back, with the start of the Academic year, & is now at the Albany Center Galleries, on Columbia St., just off Broadway. Matthew Klane & James Belflower shared the hosting duties as is customary. 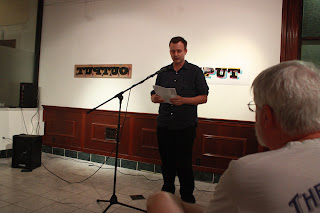 These readings typicially feature experimental writers whose work doesn't always "work" on first hearing. But tonight's readers were much more listener-friendly than many in the past, beginning with David Emanuel. He started with some poems from a series written with Jennifer Karmin, 40 word poems for Frank O'Hara's 40 years, the poems punning on "frank" & poetic imitations of O'Hara's wise-cracking. But I imagine if one were not familiar with O'Hara's work one would think, "what the fuck?" He followed with a prose piece (or excerpt from a longer work) "Properties" read a bit too-fast in which the characters/creatures kept changing to carry the narrative along, from "Sea King" to "Owltopus" to a monkey & organ grinder, to a hog hunting to truffles, to …, well you get it. 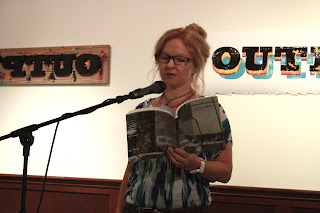 Brenda Iijima began by noting it was the anniversary of Princess Diana's death (actually August 31) & ended her reading with a journal entry written in the subway in 1997 on Lady Di's death, & on the Wizard of Oz. In between were pieces she characterized as about "the Hole," including spare poems in short phrases from Animate, Inanimate Aims (Litmus Press, 2007) & other poems of ecological paleontology using facts as images. She also included a section from a prose futuristic speculative non-fiction novel on the tear in the ozone set in an ice-hotel in the Arctic. 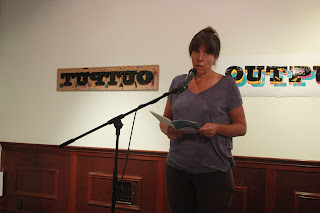 Cara Benson, who has performed at local venues here such as the Pride Center & the Social Justice Center, read from her recent chapbook from Least Weasel Chapbooks (a subsidiary of Propolis Pess) Cara Benson. She was the most performative of the readers, shedding her sandals, then launching into a rendition of a dream piece about stepping up to a mic & vomiting her words & the garbage of the Sea, then into a piece on Teddy Roosevelt & Abraham Lincoln's (alleged/debated) syphilis, a confrontation on the streets & a list of historical names -- or perhaps it was just one long piece.

Speaking of Least Weasel, I should note that Brenda Iijima also has a chapbook out from the press, Glossematics, Thus.

You can check out Yes, Reading! on FaceBook for their Fall season, readings now at the Albany Center Galleries, 39 Columbia Street, Albany, NY.
Posted by DWx at 9:51 AM