Back again after the Summer off for the Poetry + Prose open mic at the Arts Center in Troy, on a lovely Sunday there were still folks who wanted to read their words rather than garden. My co-host Nancy Klepsch had a stroke of minor bad luck so had to take the day off, but we will see her next month I bet.

Brian Dorn started off quite timely with his anti-war piece "Out of Whack," then into a poem about the difficulty of following in "Your Footsteps" & a carpe diem poem, "This Day." David Wolcott continued his serial reading of excerpts from chapters from his memoirs, this an LSD trip on a plane with his parents. Howard Kogan read his study on the fragility of memory, about a childhood experience, "Memories Are Made of This," then went on to a shorter piece "Over." Mike Connor is starting to be at home here, read 3 poems, the first a sad portrait, "She Lives Alone," then a piece about sitting in a bistro, "Window World," & the seasonal "Summer Wanes." Mystery writer (& poet) Julie Lomoe has read at many open mics in the area, but this was her first time at 2nd Sunday @ 2 & she treated us to an excerpt from Chapter 6 of her new, as yet untitled, novel of murder at a soap opera. 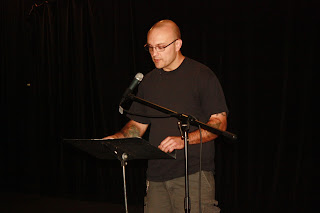 This was F. Russell Hawkins' first time here & he tried out 3 poems, the rhyming "Vertical Sleep" & another in rhyme, a dark poem about a serial killer, "Skin Song," & ended with a political poem. Elizabeth Gordon read 4 poems from her laptop from a new project writing about Cohoes, 2 about cats (I could identify with the poem "What I Hate About Cats"), & a couple about the history of the mills & of segregation in Cohoes. I jumped in at this point to read "Chatham Peace Vigil," written a couple years ago, but still relevant. Lorraine Grund read a poem abut keeping your dreams, then a poem to her sleeping daughter, "Little Goddess" & a healing poem from her book Poetry for Healing. Sally Rhoades read a prose portrait/memoir "Ellen" & one of my favorite poems, "My Father's Slippers." 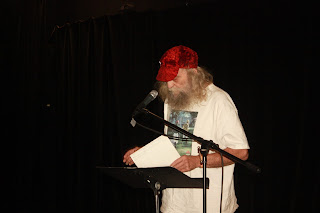 I hadn't seen William Robert Foltin out at an open mic in years, though he still runs a monthly open mic at the Colonie Town Library. He began with a poem based on an assigned list of words, "Too Many Love Songs," then a portrait of a house "Where We Live," & a poem of unrequited love, "A Broken Glass." Ron Drummond read in his requested spot, the 1st draft of a piece he said he finished at 3AM this morning, a rhapsodic flow of words of dreams of the womb & blood & the long river of women over eons that have led to him.