One thing that has always characterized the WordFest since its inception has been the open mic. This year we were at the main auditorium of the Albany Public Library, a wonderful venue for community poetry. While certainly not of the scale/length of the old 24-hour Readings Against the End of the World, often held at this same weekend years ago, much of the day brought back memories of the rhythm & spirit of that great event. There was the languid start as the morning-eyed poets gathered, there were the no-shows & late arrivals, the just-showed up fill-ins, the hardcore poets who show up throughout the year, there were the virgins & near-virgins, & the wonderful surprise poets we had never seen before (or only at last year's WordFest). Poets read in 5-minute time slots, & with the loose schedule it hardly mattered when they went over (most of the time), Mary Panza cracking the whip as the MC & host.

Alan Casline was our good-morning poet with poems all written in the last month, including one for the late Catherine Connolly. Bob Sharkey was able to read all the parts of his wandering the city poem, "Albany." Edward Rinaldi shared some of the poems he's been writing each day (was he toasting Peeps with his kids in one of them?). Always great fun, Howard Kogan included his poem "3 Jokes of Science." 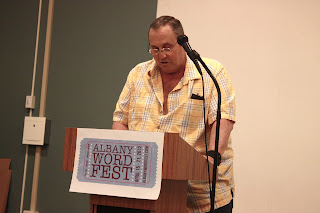 I think the award for the newbie of the week should go to Rick Harrienger, who showed up for the first time at the Slam Tuesday night, then came to the Third Thursday reading, & here he was today, with a series of poems "for the veterans," including a devastating "To the Mothers of the MIAs" about losing his buddies in a fire-fight in Viet Nam. Don Levy read some of his best, & included one of his "history of the Albany poetry scene" poems, "Tom Gogola Naked."

At this point I had to get lunch & so missed some of the poets, but there was a whole afternoon before me. When I got back there was a lull in the action, waiting for the clock to catch up to the poets.

Starting up again, the first poet up was Cheryl A. Rice with poems from chapbooks to-be, including "Moses Parts the Tulips." Frederick Glaysher  came all the way from Michigan to read an extended section from lunar epic "The Parliament of Poets," with the 20th Century Afro-American poet Robert Hayden as guide (the first of 2 references today to Hayden, a largely neglected poet). You can see the entire 15-minute performance on his website.

There was Kevin Peterson with a new piece, "Thru the Glass," followed by Albert with "a piece of rhyme" so fast I hardly caught it.  Avery appropriately enough included a poem about going to a Library, "A Trip Down Fantasy Lane," as well as the cosmic "Thanks for a Glass of Water." 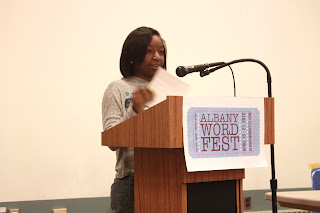 Sharisse Williams was a walk-in with poems on Art & love. Tim Verhaegen cracked us up with his "obituary poem" about his brother & the whole dysfunctional family. Leo Ruiz read a poem called "Morning Announcements," followed by Michael Purcell reading from his book No Apologies Given (Xlibris, 2011).

Chad Lowther took care of the arrangements for this reading at the Library, for which I know AlbanyPoets are very grateful; his poems are experimental, misanthropic, surrealistic & read in a unique, sometimes unsettling style. Joe Krausman is always conversational & read a cluster of poems touching on Jung's "synchronicity." Another of the area's finest poets, Anthony Bernini, read some poems in manuscript. Shannon Shoemaker did all her poems from memory. Another contender for the newbie of the week award is Jay Toraty who was also at the Slam, Third Thursday, but had shown up Monday night as well; his poem today was "To the Crazy Man Preaching at the Podium." 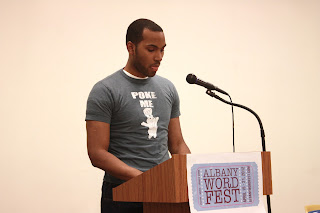 L-Majesty got some members of the audience excited with his gay sex poem, "Boy Pussy." Jill Crammond's poems took on love from a different point of view, as a natural disaster, as fire. Jan Tramontano read from her just-published chapbook, Paternal Nocturne (Finishing Line Press, 2012) poems based on letters written by her grandfather. Carolee Sherwood reached back a number of years to the prophetic "Godzilla Tears up Main St. Castleton to Show Me the Way Out," among others. I've heard David Wolcott before read his "Scottsdale Summer" memoir about working on a horse farm & was glad & amused again. I sandwiched a very old poem, "Mayasarah," between 2 recent ones, "For Moses Kash III" & "The Key." Steve Minchin read a bunch of quirky poems, including "A Piece of Vincent" (on VanGogh's ear). 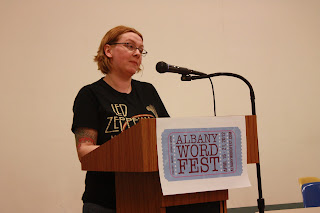 Jacqueline Kirkpatrick's poems were tuned to the Beats, especially her lament, "I Can't Beat." Tess Lecuyer included an old Persephone poem, with "Sad Food," & the witchy "Toll." Alan Catlin closed out the day in a bit of symmetry (see first poet who read) with a couple of poems based on "Desolation Row" then the horrific experience in Samford, FL at the "Emergency Room."

We were done about 4:15, WordFest drawing to a close, but not quite yet, we still had the psycho-clusterfuck of tonight's shenanigans at Valentines. Stay tuned.
Posted by DWx at 1:41 PM