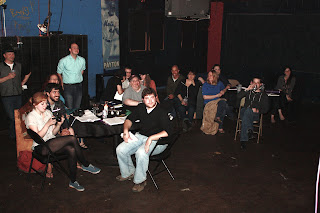 It's all over except the shenanigans (or as we used to say, the "PsychoClusterFuck"). Karaoke + Poetry = Fun was held upstairs at Valentines. Lila ran the music machine & in order to sing you had to first read a poem. There was a great variety of poets & wannabee rock stars getting more & more energetic as the night went on. Some of us even went more than once. The evening's host was the most-inappropriate professor, Daniel Nester, who kept writing things in my notebook about people taking their pants off.

Nester's poem was his ball-scratching "Mott Street Pastoral" which he teamed up with "Dirty White Boy." Later, in a weird bit of synchronicity (see previous Blog) Nester read a poem by the 20th Century poet Robert Hayden (again, see previous Blog) -- how weird is that?

Another particular favorite was Don Levy reading his poem "Action Figure with Kung Fu Grip," then making his way through "Harper Valley PTA." It seemed a perfect fit for me to hear Avery do the suburbanite's fantasy escape, "Margaritaville," although he wasn't bad later on (more juiced) as a rapper & a couple times as a back-up singer, stripped to a soaking tee-shirt. Speaking of which Sadie had an interesting poem about working in a tee-shirt factory, as well as serving as "back-up guitar" to Josh Harkins, who also had some pretty good poems, including one titled "Critical Thinking" (a love poem).

I was up a few times with various "Coyote" poems, & performed some Karaoke favorites, "Wild Thing," "I Wanna Be Sedated," & "The End."

Another poet whose work I liked (among the many) was Marie Frankson, whose strong poems & songs belied her small stature. One poem began "I love a man who…", & another recalled a "Bad Day" & she was even joined by Kevin Peterson & Avery as sweaty back-up singers at the end. Kevin Peterson read a poem "4 syllables longer than a haiku" & channeled Janis Joplin (minus the giggle) on the Mercedes Benz song; he also popped up increasingly as a back-up singer for Carlos Garcia, Marie Frankson & Carissa's grand finale. I think he's a dead-heat with Avery about which is the gayest straight guy on stage. 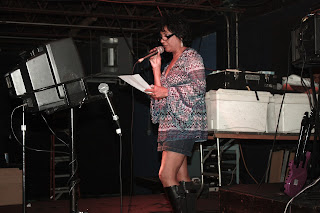 Lila even read a poem, "Too Many Clothes," & another one-timer was Jill who read a poem to her finance so she could do the Stones' "In My Life." A.C. Everson also did a Stones' tune, "Mother's Little Helpers" after reading her poem about pollution. Shannon Shoemaker recited one of her sad lost love poems before channeling Joan Jett. Ed Rinaldi was up a couple times, one time cloning the Violent Femmes, as well as backing up Thom Francis whose poem was a cover of Jim Morrison's "The Movie." 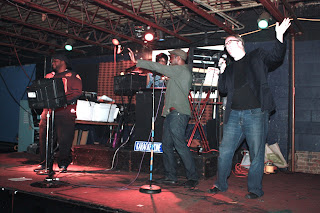 Mojavi's poems were of love & sex & then backed up for his song by Nester & Ron Shaver.

The grand finale was Carissa reading a rare poem, "Used to Do," followed by a raucous (could it be otherwise?) version of Meatloaf's "Paradise by the Dashboard Light" with a motley crew of backup singers.

Oh Baby, if you weren't there you missed the end of WordFest 2012 & have to wait for it to come around again as the World turns. It was the biggest & best of the WordFests. Who'd had thought back in 2001 we'd still be doing this & making it better each time. Thanks to AlbanyPoets.com & all those whose venues made this week so powerful.  More photos can be found at my Flicker! site.
Posted by DWx at 7:37 PM