Back again in Washington, DC for the fabulous Split this Rock Poetry Festival: Poems of Provocation & Witness. After attending the first one in 2008 I went on record (over & over again, as I am wont to do) to proclaim this “the best poetry festival, ever,” & vowed to come back. I did in 2010 (the festival is held every 2 years), & am back again this year. As I initially write this Blog in my hotel room, I’ve got to say I am once again having a great time: great poets & activists, great, informed/engaged audiences, tons of poetry books to buy, even great food (especially at Busboys & Poets). All of the venues are in the historic U St. district. 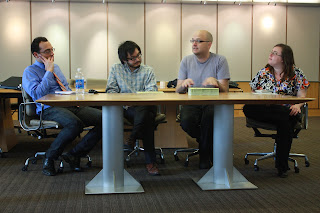 Appropriately enough the first panel I attended was titled “Poetry as Activism, Activism as Poetry: Poetic Interventions in the Public Sphere.” The panel was chaired by Philip Metres, who talked about the Peace Show in Cleveland, OH, an annual Labor Day alternative to the Air Show there, as well as a student project to collect stories from peace activists. His presentation focused on poets as writers & as people who are connected to the community.

Jennifer Karmin, from Chicago, showed images from some of her street performances, including one in which artists rented parking spaces to set up art projects & performances on the street. She also described collaborative events, like the Walking Project & “4000 Words 4000 Dead,” both of which take place on the street in public places.

Ken Chen is the Director of the Asian-American Writers workshop & talked movingly & graphically about working with immigrants’ rights organizations in Arizona, witnessing assembly-line like plea bargaining for captured immigrants in chains. See www.wordstrike.net.

Mark Nowak began with drawing the distinction, & comparison, of the poem as a noun (a thing), & the poem as a verb (action). He is currently working with international organizations on a Domestic Workers Bill of Rights (similar to, & expanding on, the law passed in New York State). He described his work in running creative writing workshops as an organizing tool for workers in Ford plants, both here in the US & in South Africa. 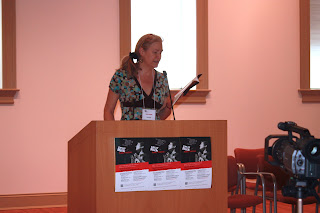 Later in the day I attended the "Tribute to Sam Hamill and Poets Against the War" held in the True Reformer Auditorium. Sarah Browning, Executive Director of the festival, served as host & MC. After reading one of Sam Hamill’s poems she read a couple of her own from her own fine collection Whiskey in the Garden of Eden (The Word Works, 2007, 2011). 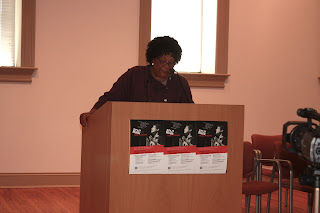 Marilyn Nelson read the poem/letter “To Bill & Chris” by Hamill, a meditation on printing books & changing technology. She also read her poems “Honor Guard,” a moving story of an illegal immigrant’s military funeral, a commentary on existence & on being human, “Nothing Stranger.” 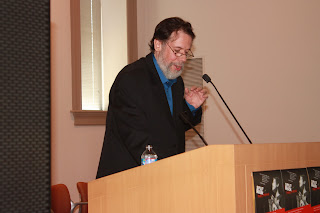 Martin Espada began by reading “Blasphemy” which he dedicated to Hamill -- poetry can save us--, then his poem about returning to his old Brooklyn apartment many years later, & ended with his poem, "Alabanza: In Praise of Local 100," that is in the Poets Against the War (Nation Books, 2003) anthology, before introducing the honored poet himself. 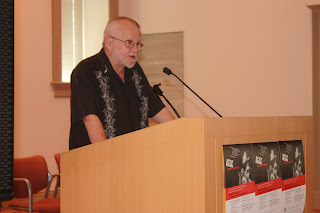 Sam Hamill brought about a fire-storm of poetry in response to the fire-storm of the US invasion of Iraq in 2003 when he responded to Laura Bush’s invitation to read poetry at the White House by inviting folks to send him anti-war poems to read instead. Thousands of poems later, & a best-selling anthology, Poets Against the War is an example of the community of poets rising up with their varied voices to say “No!” to war.  Laura Bush called off her planned poetry symposium.  The poems Hamill read today ranged over a series of issues confronting us, including a New York poem written in September 2001; the long, angry & pensive “Body Count;” “The Road to Rama” (on displaced Palestinians); “Eyes Wide Open” on an anti-war exhibit of military boots; a poem about a murder in Mexico during the on-going drug wars; a poem on immigration “Border Song;” & ended with an image from 1963 as a Buddhist immolates himself to protest that war. Even (especially?) with the overt political context (after all this is Split This Rock, isn’t it?) his poems are filled with stirring language & the rich images of the best poetry.

The rest of the festival was filled with other engaging, provocative panels, & readings. Split This Rock calls poets to a greater role in public life & fosters a national network of socially engaged poets. From its home in the nation's capital, it celebrates poetic diversity & the transformative power of the imagination.

Check back at this Blog for more entries on this fabulous Festival.
Posted by DWx at 12:00 AM