Executive Director of Split This Rock, Sarah Browning served as our MC for the first evening reading, held at the Carlos Rosario International School, a brisk walk up 11th Street from U. Street. The 2012 Split This Rock Festival is dedicated to the memory of poet, activist, teacher June Jordan. Sarah invoked June’s memory & that of Trayvon Martin, Sean Bell, Amadou Diallo, & the long list of other murdered black men & women throughout history, then played a recording of June reading one of her poems in the voice of Valentine Jones. 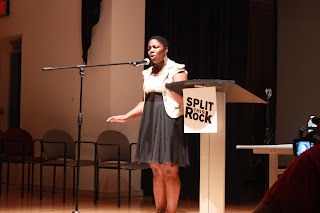 Each of these readings included a performance by a young poet from the DC Youth Slam Team. Tonight, Lauryn “Poetic Hyst” Nesbitt gave a stunning recitation of her piece beginning, “It’s taken me weeks to write a first line…” about disrespect of students in school. Watch out for these young poets, they are coming up fast. 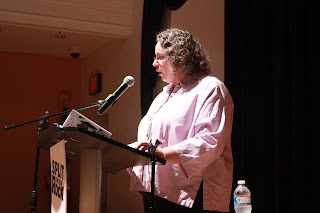 The last few days I had been reading the poems of Kim Roberts in both the current issue of the Beloit Poetry Journal (a chapbook anthology of Split This Rock poets) & in her most recent collection Animal Magnetism (Pearl Editions, 2011), & tonight she read from both. She began with 4 of the medical museum poems from Animal Magnetism, “Blood Letting,” “The Apothecary Doll,” another about the skeletons of a giant & a dwarf at the Mutter Museum in Philadelphia, & “IUDs”. She finished with a poem from the Beloit Poetry Journal, “The International Fruit of Welcome” (pineapple, if you must know), & a new poem, a childhood memoir, “A Boy Named Schmudge.” 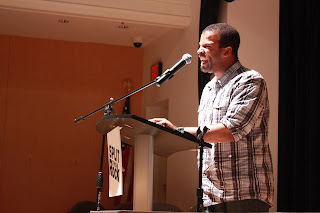 Douglas Kearney began by flopping himself onstage to demonstrate how James Byrd Jr. was dragged (face down, by his feet) behind a pick-up truck, then read his poem “Big Thicket Pastoral.” Two of his poems referenced modern musicians, the intense, repetitive “No Homo” from a phrase of Lil Wayne, while a poem on domestic violence, “Live Evil,” referenced Miles Davis. In between he performed “The Black Automaton #3” (from The Black Automaton, Fence Books, 2009, 2011) described as a work song. He ended with a dramatic (actually, they were all dramatic) piece on the Middle Passage in which he used, among other borrowings, lines from T.S. Eliot’s “The Love Song of J. Alfred Prufrock.” Kearney presents his poems with shouting, whispering, stuttering repetitions, his voice rising & falling as needed, true performance poetry not constrained by a single style of performance as often seen on stage. His performance also helped me to understand his often puzzling layouts on the page. I had been puzzling over his poem in the Beloit Poetry Journal until I realized they should be “read” as musical scores, or scripts for performance. 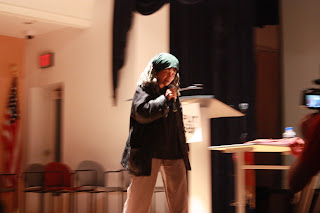 Finally, how do I even begin to write about Sonia Sanchez reading? I didn’t audio or video record the reading (though the folks at Split This Rock did) & sometimes I was so enthralled I forgot to take notes. But there she was, “the conscience of poetry” as Sarah Browning described her, the Poet Laureate of Philadelphia, a giant hiding behind the lectern. She began expressing thanks for being “in this place called Washington DC” & with a commentary & a poem -- as throughout the edges were frequently blurred into one continuous stream of performance -- (“man is an alien in this world…”) reading for Trayvon Martin (as others have, & will, throughout the Festival) & another 17 year-old boy dead. “A Poem for Sterling Brown” was written after reading in The New York Times about a 3000 year-old mummy. A poem dedicated to the folks at Split This Rock on the themes of death, loss & words, wove in singing lines & scat-singing, lingo & sound words, like a voodoo ceremony in a Baptist Church. Then on to “Peace Poem for Maxine Green,” & a poem for her father & her brother, interrupting, or glossing, the stanzas with commentary. Her concluding performance started off recounting some of her conversations with June Jordan, as she came from behind the lectern, microphone in her hand, more scat & voodoo words, chanting, crouching, touching the stage, like a Shaman, ending with “JuneJuneJuneJune… JorJorJor… Done!”

Sonia Sanchez made the hammer ring tonight at Split This Rock.
Posted by DWx at 10:56 PM