It was the last Monday, again, & Thom el presidente Francis was our host. & Nicole was our most gorgeous waitress, yes! & it was an open mic.

Sylvia Barnard was first up with her poem about dying flowers, "Painting Flowers." Then I read my new poem "Split this Rock Dream Poem" & the old poem "Joe Krausman" (originally published in Open Mic: the Albany Anthology). Josh McIntyre's poems are characteristically short, as was "Downhill Blues" & the very short "NIght & Day". Chad Lother has popped up a few times at local open mics, tonight read a narrative titled/about "Juda" polishing the shoes of D.B. Maybe you can find him at WordFest this year. 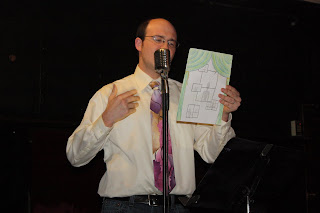 Tonight's feature was Avery Stempel with a variety pack of poems, from the very short (a haiku), to the almost interminable "The Colors of the Rainbow" which was printed out on different colored pages with astrological & mystical signs & symbols & wingdings on the back, a meandering poem of movie lines, random philosophical (& otherwise) thoughts, timed throughout the night & day. Other pieces included his "Blossoming Flower" in hip-hop lines read fast (he has a tendency to read his work fast, pressured, in a somewhat numbing rhythm). He writes with poet friends from Siena College (who'd thunk?) in a collaborative group called "Different States of Poetry" that co-creates a poem every month; he read one of his contributions to the group, "Reflections on Windows." He has been showing up here recently at the open mic & it was good to hear a bigger chunk of his interesting work. 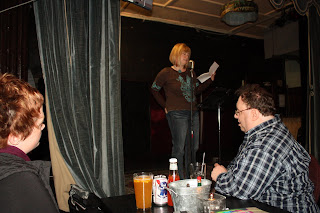 You have to stay up with pop culture (both gay & straight) to get with the poems of Don Levy & tonight he challenged us with "Ziggy Family Peanuts" about the Sunday funnies. Jill Wickham told us about Barbie & G.I. Joe & Ken in "What the Dolls Do When They Sleep" (I always wondered!) & then "An Old Story, after Bob Hicok" in his style of random connections.

While I got Carolee Dawn Sherwood's little story titled "Tuesday Lunch" in my notes OK, a line I liked from her poem "Mine" disappeared into gibberish -- oh well, I enjoyed it. Jason Crane showed up in his bike outfit (you know, those cute little hats & tight pants) & read "Lillian Dupree & the Ballad of Frenchman St." which has just been published in Blue Collar Review (Journal of Progressive Working Class Literature); also, from his forthcoming chapbook, "Eating Godzilla." Joe/Songsten Hollander signed up as "Pablo" with a love poem to a Newark stripper, ah!

As it says on the masthead, "It's not the Truth, but it's pretty darn close."

I hope someday to get to the point where the wearing of tight pants would be anything other than a horror for the audience...

Yes, like a complete falling down on your ass laughing joke, like it would be for me now.
May you live so long my friend.