Invocation of the Muse, November 7 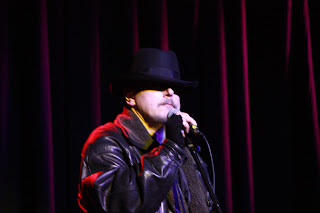 It’s been a year since R.M. Engelhardt started this new poetry series in Albany over at the Fuze Box. He still does a “Goth Night” there on a Friday night each month, but the poetry is now at Lark Hall on the 1st Monday of the month. Tonight he read one of his own poems (he was the night’s Muse?!?) his Stevie Nicks hat too big, to get us started “Bad Omens, Monday, November 14, 2022, the Year of the Asshole.”

Since I was up next, I wondered if he was referring to me — anyways, I read poems of ghosts & witches, the ghost poem “Photo at the QE2, 1991,” then the witch poem, “Witches in the Attic.” Josh-the-Poet followed with 3 very short love poems, “Calling You to the Moon,” one about being attached, & “If Love Was Easy.” Daniel W. (who was not me) read a string of Haiku, with titles like “Inconvenience,” & “Gentle, Not Kind.” The next poet signed up as “UNLOK (Gordon)," whatever that means, & performed from memory (or improvised on a theme) a long, oh-so-serious political piece titled “Stump Speech Part 2.” 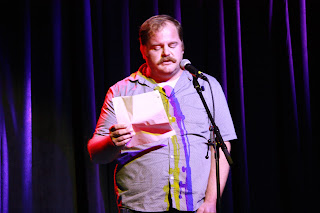 Pat Williams has been showing up here in the last few months, & made his first appearance back in January when this series was at the Fuze Box. Rob introduced the feature tonight by highlighting Pat’s “sports poems.” Many of the poems he did read he has tried out here at previous open mics, including “The Trapped Beast,” “The Meat Grinder,” & a couple of villanelles. It seemed at times that he was parodying people’s images of what poets do, writing about “Nature & friendship,” often in short lines with erratic rhymes, but there didn’t seem to be any of the promised “sports poems.” I called out from the audience asking for a football poem, & he obliged with “Are You Ready for Some Football,” using language from broadcasters, with repeating lines. & at the end he read a plumber poem, “Drip,” for an eclectic mix of topics & inspiration.

After a short break, Rob was back “without further ado,” as he said, with the rest of the open mic list. Maurice, who is also a regular on the first Monday, read what he said was a revision of an earlier poem, the first part a description of a car crashing into a hydrant, then into a pensive reflection on a break-up.

The poet who signed up as “Irby Poetry” began with the teacher/preacher ploy to engage the congregation, “how are you feeling? Everybody OK?,” the recited a short piece on a toxic relationship. The next reader Shalom Harrison, had trouble reading her  poems, which were like notes towards poems, from her phone, one piece an engaging love poem about basking in the sunlight.

Rob’s poem “Nope” was like a barroom lecture on The Word, complete with the dubious description of poets as outcasts “with a higher I.Q.” — some do, some don’t. Austin Houston read early poems, “My Aunt’s Backyard” was dated in 2011 & was written as a school assignment, while “Neverland” was inspired by Peter Pan, whether book, movie or play he didn’t say. 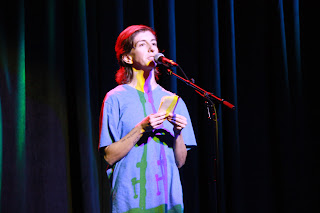 Wil Lo was one of our bartenders tonight & came on stage to read a piece titled “The Juror” about being in court to support a friend for the verdict. John floats in & out of some the open mics with his poems on intriguing images, like “The Painting Room” & the extended metaphor of “Chess Freestyle.” Sandra D. ended this night of poetry with an auto-biographical, dysphoric limerick (of sorts), then a poem of angst against "the in-crowd."