The Year in Review, December 17

This was billed as “an immersive spoken word event” (I was afraid I’d have to wear a bathing suit but I knew there was no swimming pool at The Linda) “where we will look back at 2021 AND look ahead at what we planned for 2022,” the “we” being our own Albanypoets. In fact, this event was held at The Linda, the WAMC theater on Central Ave. in Albany where in past years Albanypoets had organized many spoken word events, & indeed it was a looking back & a looking ahead. It seems fitting now to be posting this in the first days of the New Year.

There were 8 local poets performing, well-known to one degree or another to the larger poetic community. Peter Hughes, General Manager of The Linda introduced Thom Francis, el presidente of Albanypoets, who was the MC & was one of the performing poets. 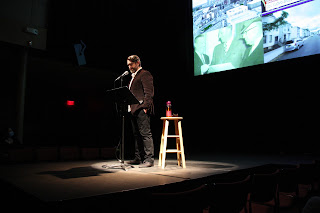 First up to the mic was James Duncan, with poems from/about a variety of places, from Albany, to the NYC “Skyway, to East Greenbush (“Jaws of Memory”). He read (“A Splinter”) about finding a copy of Carl Sandburg’s Harvest Poems in a 2nd hand bookstore in Columbia County; you can find James’ accounts of his visits to bookstores far & near on the AlbanyPoets.com website. His poem “Who Lives Here?” was about where he lives now on Pine Ave. (either South Pine or North Pine), in close proximity to other readers here tonight & audience members. His reading also introduced the night’s multi-media aspect of videos playing behind the readers, shots of local areas, or other places such as NYC that we, the audience, recognized. 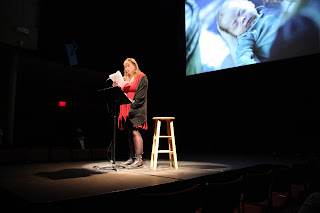 Next up was one of my favorite poets who also happens to be local, Rebecca Schumejda, who read only one, long piece, “Advance Directions,” from a book in-progress, but what a moving, intense  experience, looking back into the almost-gone past year. Mixing pandemic rules with images of cancer treatments of her dying mother & husband, with tough images of suffering & death, it was an incredibly brave & tender poem of grief. Like most poets you can find her wonderful poetry books on Amazon. 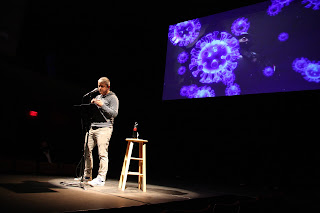 Matthew Klane, in contrast to Rebecca, read many little poems & he read them from a stack of little pieces of paper held in the palm of his hand. Most, if not all, had titles but if I tried to write all the titles down I would’ve missed the poems. They are satirical political, sociological analysis/critiques of pop culture & news, stories. They are quirky, often humorous & full of the word-play of a natural-born punster. He also seemed to enjoy the video playing behind him, checking to see where he was at. 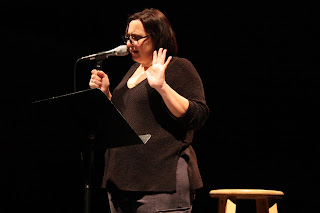 The vice-President (emphasis on “vice”) of AlbanyPoets, Mary Panza, is a long-term veteran of the poetry wars in Albany, one-time bartender, current massage therapist & Mom. She read a mix of new stuff & some welcome old favorites, beginning with a COVID word-play on forms & numbers, “The Dyslexic Pandemic.” She is proud of having survived South Troy, & read a memoir of sitting on the stoop “Parked Cars,” another on a string of memories from the ’80s addressed to her daughter. She read in her barefeet as she was in the poem “Muscle Memories,” & the poem “Those Black & White Photos” was nostalgia for a more recent time. 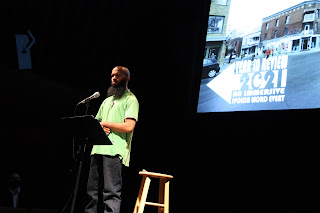 Austin Houston published a slim book of poems in early 2021 Existence: Chaos in Our Own Backyard. Tonight he read what he described as “a timeline from 2021” beginning with a piece on Donald Trump, the former President, & the January 6 riot he instigated.  Another piece from the year began, “Forgive? I’m just depressed…” He also read a poem/letter addressed to a young friend who died in a motorcycle accident. Indeed, on a national level & on a personal level, it has been a tough year. 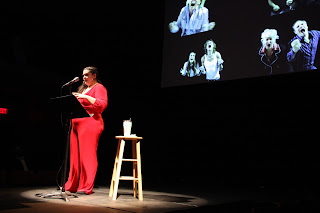 The poet who goes by the name Siena has been showing up on occasion at area open mics & making an impression on the audiences. She also read a couple of “pandemic poems,” one about wanting to write a poem when it is all a memory, another an ode to social workers, reflecting on the drain on herself during the year. Many of the poems I’ve heard her read previously are personal, one about saying sorry, another an angry relationship poem. & the poem she ended with looked back to December a year ago titled “Written for Each Thing We Missed.” 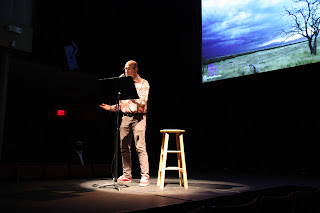 I first encountered Avery Stempel & his performative poetry in the late 1990s, & he continues to write poetry, & has recently started Collar City Mushrooms in Troy (of course). He read a series of poems from a poem-a-day project he did in March 2020 (!), each piece titled with number of the day in the series, images of what’s around him, plastic bags, “salad days & salad bars,” Zoom & his reactions, & on the birth of Collar City Mushrooms. His signature mushroom poem is “Tao de Mogu.” & he ended with the affirmative “From Me to You.”

Thom Francis has been around the poetry scene here even longer than Avery, one might say he grew up in it, & he has been running AlbanyPoets for a long time, his organizing & technological skills making it one of the big presences that put Albany on the poetry & the Slam map. He was introduced by Mary Panza. Like this event, his poems tonight looked back & looked to now & on. Interestingly enough he read 2 poems with a shower in it, one actually titled “Shower” as if it were a confessional in a Catholic Church. He read a poem about moving back to Albany, back to South Pine, titled “Today,” then there were poems about his family tree as a bag of sticks & lawn clippings, & the telling evidence about what is in his pockets. 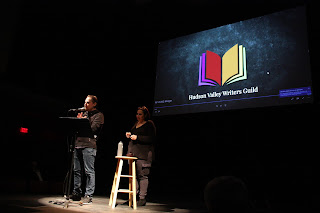