Charlie Rossiter, our host, welcomed us to “Bennington” with his rap-inspired open mic welcome chant, & off we went, doing a round of (mostly) 1 piece each, then back around again. There were 9 of us “here.”

Julie Lomoe reprised her dialogue between “Super Don” & “Baby Don” that she had tried out on Sunday, but she has added more & so it was even longer, rehashing anecdotes from Too Much and Never Enough: How My Family Created the World’s Most Dangerous Man by Mary L. Trump. For the 2nd round, while we took a brief break so Tim & Tom could go to the bathroom (separately), Julie talked about meeting Miles Davis in Milwaukee. 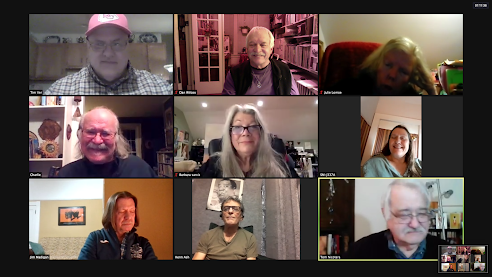 Tim Verhaegen joined us for the 1st time & entertained us with a piece titled “Heroes,” football from a gay man’s point of view. For the 2nd round he read a lyric by Lauryn Hill, “I Used Love Him,” which Tim said was the story of his past.

Kenn Ash read a piece on dreams then played his trumpet to recorded accompaniment; in the 2nd round he switched to his pocket trumpet.

Laura Elzey’s poem, written last year, titled “The Fullness of the Lack of Motivation” was a meditation about staying in bed. For her 2nd round piece she sang a song in Spanish, the English title was “The Ugly Doll” which was abandoned in the attic.

Barbara Sarvis held up a couple of her illustrations, one like Van Gogh sunflowers, & read  “Mind Painting.” In the 2nd round she read the short & funny “Moonshine Grannie.”

Tom Nicotera read a piece I’d heard previously about a wild turkey & a mailman “Turkey Love,” nothing wrong with hearing a good poem more than once. His 2nd round piece was one I had also heard him read before, in Poets in the Park in Albany, “Alternate I-80,” about going to Chicago to visit Charlie when he lived in Oak Park, Illinois — ditto what I said.

Continuing an evening of repetitions, Charlie Rossiter read the piece about a catalog of church supplies that he read Sunday at 2nd Sunday @ 2, then in the 2nd round from his 2007 book from FootHills Publishing The Night We Danced With the Raylettes, a poem about white privelege “At the Ocean” — again, “ditto what I said.”

Jim Madigan dialing in from Illinois & another regular here (wherever that may be) read “Rum & Potatoes,” just published in a British publication, about genocide & slavery. & in the last round a memory of being on a train to Chicago (another minor theme tonight), “A Poem for Every Person,” a fine end to a fine night.

One used to have to drive to Vermont to join this open mic, but now, as elsewhere, you can join it in the comfort of your own home, shoes & pants optional, every 2nd Tuesday. Email Charlie at charliemrossiter@gmail.com for the Zoom link.