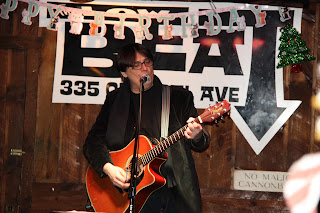 Nick Bisanz was the host tonight at The Low Beat, with his guitar, so he started us off with a couple of songs, “En Avant” & “The Fox Holes of Hollywood,” to set the mood, so to speak.

I led off the open mic sign-up with a recently re-discovered piece “Big Tent Haibun,” then one of my modernized imitations of Han Shan “Open Mic,” & a poem imitating Lyn Lifshin’s poetry “Vegetarian Sex.”

Amanda Pelletier was back again with a couple of long pieces, like put-down letters, the first referencing the TV show Family Guy, the second titled “How Are the Giants Doing?” addressed to someone who is a Giants fan.

The poet who goes by the handle Slay The Dragon also read a piece in the form of a long letter, “It Came Back,” about his own darkness, what he described as a “mental health awareness poem,” then another piece addressed to a woman with blue eyes “Killer Frost.” 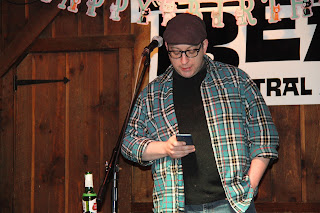 Ross was the last of the open mic readers. He had 3 pieces, “One Man’s Zenith,” “Manic” like an argument with a woman, & a long series of musings about himself & advice “Random But Honest.”

Then Nick ended the night with more songs, including channeling Buddy Holly with “Heartbeat.” Brass Tacks is an open mic for poets that takes place on the 1st & 3rd Tuesday of each month at The Low Beat, 335 Central Ave., Albany, NY, 7:30PM.
Posted by DWx at 3:23 PM