Always a “must-go-to” on my list, this night even more so with the featured poet Mary Kathryn Jablonski. & this was the last of the 2019 season since the last Monday of December falls in the midst of the holiday season on the eve of New Year’s Eve. Tonight as always the host was Mary Panza.

First on the sign-up sheet was Sylvia Barnard with a poem from a workshop at church on the poetry of T.S. Eliot, an eco-poem titled “The Chorus of the Earth,” then the 3rd version of a poem she has read at open mics previously “Grandma Moses.” Tess Lecuyer read 2 haiku, one for a rainy Fall day, another with a title “Mum’s Just Want to Have Fun!” & then “November Sonnet.” Julie Lomoe’s poem about depression was titled “11 Ways of Looking at November” with a look to Wallace Stevens. 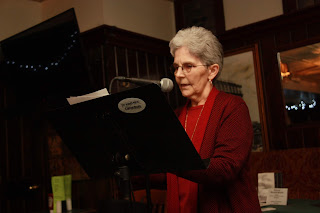 Marilyn Zembo Day made a rare, & welcome, appearance & read a moving, intricate piece on the coming of Winter & her son’s addiction, “Yesterday the Day After This Morning.” Kristen Day read a favorite poem of many of us in the audience, a hilarious conversation with her Grandmother “Four Fucking Dollars,” then, at the request of tonight’s featured poet, sang for us the spiritual “I Wish I Knew How to Be Free.” Don Levy followed with a tale about “A Call from the Doctor.” I read 2 old poems, “What Happens in Autumn” & “What the Deer Sees” (I tend to read poems that I’ve just written, but have a truckload of older ones that should see the light of day again once in a while). 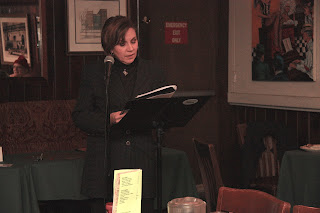 Mary Kathryn Jablonski has a new book of poems Sugar Maker Moon out from Dos Madres Press but tonight read poems not in the book. She began with a tale tale told to her on a massage table “First Kiss,” “World of Two” about a yellow tabby cat, then a memoir of her mother, & the provocatively titled “Marriage & Death.” Back to another childhood memory this of the barn & fields where she grew up “Minor Mischief,” then a poem about collecting postcards “Postcard Divorced of Meaning,” & “Octopus Bride” based on her reading Sy Montgomery’s The Soul of an Octopus. Her final poem, “Fortune,” similar to Bob Sharkey’s take on Chinese Fortune cookies, was based on them also, but in couplets with the actual fortune & her response/reaction, funny, & sometimes unsettling.

It was good to see Ian Macks back at open mics here, but upsetting to hear his poem “The Black Problem” about racism he experienced on the job at Whole Foods & at a vegan restaurant he called “Skinhead & Mustache.” D. Alexander Holiday read a poem titled “Nigger Lips” by Martin Espada on the same issue, then read from local poet Victorio Reyes’ book The Rebirth of Krazy Horse the poem “For Dna, Emily and Thora.” Joe Krausman read his much-published poem “The Passionate Accountant to His Love,” based of course on Christopher Marlowe’s “The Passionate Shepherd to His Love,” then the more ethnic “My Son the Meshuggenah.” Carrie C. read a couple of her older poems, “Isolation” on PTSD, & “Hard & Forceful Punishment” like being tortured by the weight of stones.  Tim Verhaegen read a memoir of a young friend who died years ago, “Squinting through the Darkness.” 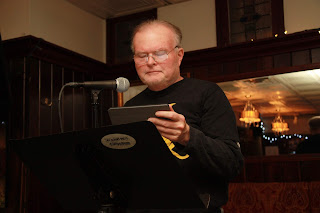 Glenn Cassidy read 2 memoir pieces, the first about Thanksgiving Day 40 years ago “Revenge of the Shrimp Cocktail,” then a tale of his high school math teacher (Mary Panza announced that Glenn would be the featured poet here at Poets Speak Loud! in February 2020). Tom Riley read a rhyming poem “My Grey November Cloud,” then one titled simply “Dragonflies.”

Since there will be no Poets Speak Loud! in December, Joan Geitz had at the distinction of being “the last reader here of the decade,” & read a poem from 31 years ago, like a prayer for the future, “I Want to be Free Again.” & thus this decade of poetry at McGeary’s ends.

Poets Speak Loud! will be back at McGeary's Irish Pub on Sheridan Square in Albany, NY on the last Monday of January, 2020 (January 27) with the Annual Tom Nattell Memorial Open Mic with your guest host, Me! at 7:30PM — preceded by the ceremonial beret toss in Tom’s honor at the Robert Burns statue in Washington Park. Watch for information on AlbanyPoets.com & on social media.