& they certainly do sometimes, especially our host, Mary Panza — &amp; don’t walk in front of the stage!

Tom Bonville got us off to a good start with a tongue-in-cheek commentary, “In the City,” on the Albany chicken ordinance, & his proposal for one on foxes as well. Guy Reed came up from the mid-Hudson scene & read Wendell Berry’s poem “How to Be a Poet,” then one of his own, an eco-poem “In the Film they Called Drake’s Passage.” D. Alexander Holiday read other people’s poetry, Rudyard Kipling’s “If,” & Stevie Smith’s “Not Waving But Growing.”

Joe Krausman’s first was a NYC poem walking with his head down in canyons where you can’t see the Moon, then an ode to his neurologist. Sylvia Barnard read a cluster of Haiku, with 2 about Washington Park & others about Autumn. A new voice here, Shaina, read a tender, hopeful poem about spreading her father’s ashes. 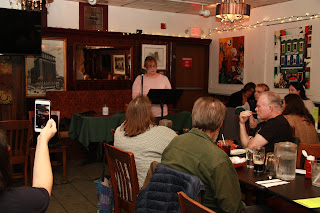 I’ve been following the work of poet Rebecca Schumejda since since her 2008 collection Falling Forward (sunny outside), through a couple of chapbooks, her stunning Cadillac Men (NYQ Books, 2012), Waiting at the Dead End Diner (Bottom Dog Press, 2014), & Our One-Way Street (NYQ Books, 2017). She writes books of closely linked poems, creating a narrative that sneaks up on the reader. Tonight she read from her newest book Something Like Forgiveness (Stubborn Mule Press, 2019) which is a much more tightly weaved narrative. The story she tells, of her brother, & her own struggle to forgive, or to even to find out what is forgiveness, is built on the slow accumulation of details like a suspense novel. One is forced to read the book from cover to cover to its tender, heart-breaking end. Tonight, she read to us excerpts, snippets, making it irresistible to get the book. Enhancing the text are enigmatic, evocative illustrations by Hosho McCreesh. It was a moving, tender, & upsetting reading — & read.  (A program note: Rebecca Schumejda will be the featured poet at the Third Thursday Poetry Night at the Social Justice Center in Albany on December 19.)

On to the rest of the open mic, Cheryl A. Rice read from her collaboration Until the Words Came with Guy Reed from Post Traumatic Press the poem “Paul Newman at the Dodge,” then the title poem from her 2013 chapbook from A.P.D. (albany poems delight) Moses Parts the Tulips. Julie Lomoe put up her poster for her novels from the recent Albany Book Fair & talked about her favorite topics, her brain surgery & her Woodstock Music Festival paintings, before getting around to her apian-cide poem “Garden Yellow Jackets.” 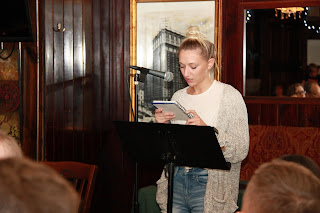 Allie Doyle was another new voice here tonight & she read 2 related pieces about a person dying of cancer, filled with hallucinations & anguish. It being Rosh Hashanah I decided to read my poem “Taschlich” set in Gloucester, then another Gloucester-related poem “Spiritual Power” from my chapbook Gloucester Notes (FootHills Publishing, 2015).  The final poet & final new voice was Glenn Cassidy who read “Hip Hop Brothers in Love” (or, as he called it, an ode to the Guest Rapper), then from a series on teaching & teachers, a piece about his high school art teacher, “Mrs. VanStretter.”

It was another eclectic night in the back room of McGeary’s Irish Pub on Sheridan Square in Albany, NY where we gather most last Mondays of the month at 7:30 for Poets Speak Loud! — check AlbanyPoets.com for details.
Posted by DWx at 7:40 PM