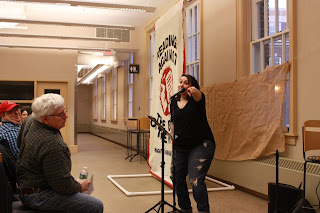 The original Readings Against the End of the World began in 1984 as a fund-raiser for the anti-nuke group Albany Peace & Energy Council, & ran until 1993, under the direction & coordination of Albany poet & activist Tom Nattell until 1993.
Three years ago the combined forces of AlbanyPoets & the Albany Writing Center with the coordination of Dr. Jil Hanifan joined to resurrect the event at Husted Hall Cafe on the UAlbany Downtown Campus. Mary Panza, Jil & Sally Rhoades shared hosting duties, with an ebb & flow of students & community poets. I was in & out during the 24 hours & managed to hear, by my count, 37 poets. 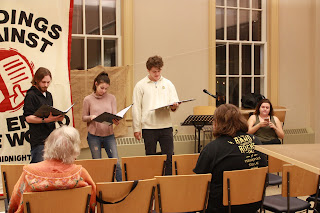 I had signed up to read at 2AM, but at about 11:30PM there was to be a gap with no readers, & I was still hanging out with Charlie, so Mary asked if I wanted to read then, so I did & thus was able to go home for a somewhat normal night’s sleep. But before I left we caught performances by drama students of a reading of an original short play, & a reading of Samuel Beckett’s short work “Breath” consisting of only stage directions.

The next day the Friends of the Albany Public Library was honoring the writer James Lansdun at their annual Author’s Lunch, so I stopped in at the RAEW to catch a few readers — Cheryl Rice, Wisteria Andrews, & Brian Dorn (“22 Reasons Why Some People Don’t Go to Dorn’s Space” notably not in rhyme). 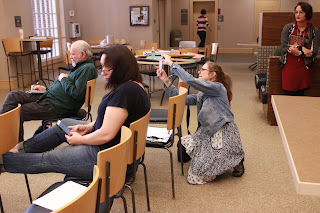 When I arrived back later in the afternoon Sally Rhoades had volunteered to do intros & I caught Bob Sharkey, Joe Krausman, & 2 Bretts: Axel & Petersen. Also Sean Foley with a long meditative poem titled “To Empty a Rifle.” The mid-afternoon session included a couple of student poets with stunning work; Sarah Zahed included with a poem of her own, poems by Mahmoud Darwish & Yehuda Amichai, & later Annika N. also read translations from the German of Gottfried Benn (1886 - 1956) & Rainer Marie Rilke, as well as her own poems.

Afternoon gaps in the schedule were filled by Jil Hanifan (a Mary Poppins fantasy), Sally Rhoades, & even I got a second chance at the mic to read recent poems inspired by my trip to the Scissortail Creative Writing Festival in Ada, OK.

The 24-hours that began with local poets turned out to end with local poets as well, & Karen Fabiane got the honor to be the last. That wasn’t how it was planned. There was supposed to be a group of “celebrities” from New York City to fill the last 2 hours. It didn’t happen. We just did it ourselves.

But this was only the beginning of what was to be 9 days of daily poetry events in the Capital Region. Stay tuned & I’ll take you through it.