Each last Monday in January we celebrate the life & work & poetry of Albany poet & activist Tom Nattell, who left us in 2005, with an open mic (no featured reader) at McGeary’s Irish bar in Albany. But prior to that there are always a few hardy souls (it being January in the Northeast) who gather at the Robert Burns statue in Albany’s Washington Park for the annual Memorial Beret Toss at the site where Tom ran the Poets in the Park program each July since 1989 — & it continues to this day under my direction.

The open mic with Dan Wilcox (i.e., me) & Charlie Rossiter (3 Guys from Albany) performing along with the voice of Tom for their signature opening to their performances. Then I read, as I do each year, my short elegy “Theology 101.”

Douglas Holiday talked about his early days in the Albany poetry scene, then read, not his own poem, but a poem by Hilton Obenzinger “The X of 1492,” an anti-Columbus, anti-imperialist screed. That reminded me of Tom’s Christopher Columbus Fantasies from 1992 SO I read one. A.C. Everson talked about her piñata days at the QE2 open mic that Tom ran, lamented not finding her Tom poem, but read instead “1st Day” written New Year’s Day. 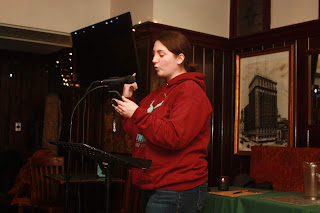 Christa DeMarco had only discovered the poetry scene back in July of this year, she read a couple of political poems, one titled “Give this Man a Dictionary & a Thesaurus” then another with a garden metaphor; she will be the featured reader here next month.  Guy Reed came up from Saugerties to join the festivities & mentioned he had stumbled on Albany, Minnesota in his travels (3 Guys from Albany performed there in November, 2005 as part of their epic “All-Albany Tour”); Guy then read a poem for his daughter “Apples” & a short piece “Oh But It Does.” Don Levy was there in the early days of the QE2 open mics (Tom once dubbed him “the safe-sex poet”), & Don tonight read a tribute “To Millie” about the recently gone Millie DiBlasi. 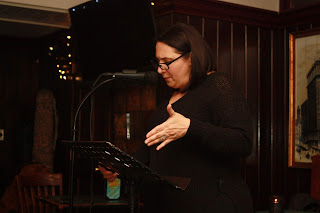 Mary Panza is the usual host for Poets Speak Loud! at which she doesn’t read but felt free to tonight to share a few of her poems, a newer piece “No One Escapes the Pain of Being a Person” then on to a couple of older pieces, the memoir of herself over Time “Those Black & White Photos,” & her response to an interviewers question “Why Poetry?” Cheryl A. Rice had spent a couple years in Albany in the 1990s & read a poem written after attending the open mic at the QE2 “My Central Ave.” then a piece titled “Traveling.” I gave Tom a voice here in the middle of the list by reading his poem "Tiananmen Square,” noting that this year will be the 30th anniversary of that uprising. Julie Lomoe also read her “Tom Nattell poem,” hers about Tom’s last reading at the Lark St. Bookstore “Open Mic Night on Lark St.” Mark W. O’Brien also paid tribute to a one of the gone poets, Catherine Connolly, who read at the QE2 open mic, by reading her poem “Ariel’s Birthday for Ted Hughes,” then one of his own “Dear Josephine.”

Gene Barry came all the way from Ireland for this event & to read from his new book of poems Flaking the Rope (available from Amazon.com) “Stuffing Hanks” & “In the Black,” rich, lush images. Sally Rhoades spoke about her first reading at the QE2 open mic, then read a memoir poem of her family & herself as a youth “What Would I Be as a High School Poet?” & a piece on her other passion, dance, “I Had to Raise the Feminine.” Brett Petersen was another of the younger generation of poets here tonight; his poems were full of word & sound & image play, the first with a long title I didn’t get all of but began “Needle My Ogle Poodle Like …”, then “Let Breakfast Be Your Catechism.” Joe Krausman’s first poem’s title was a quote from William Blake “Exuberance is Beauty” & was about the perils of public speaking, then another that had been published in an anthology of accounting poems “The Passionate Accountant to His Love.”

Charlie Rossiter, who runs a monthly open mic in Bennington, read a poem “On Reading My Brother’s Facebook Post” pondering his childhood & the mentality of Trump supporters, then a poem in the manner of Kenneth Patchen about legs on a plane “If You See Something.” Avery paid tribute to Tom by reading from one of Tom’s chapbooks, Pell Mell - Words for Voice & Consideration (BOOG Literature,1992) “Save It” & “The Richard Nixon Library Fantasy.” Tess Lecuyer came out of the woods to join us tonight & read “A Love Sonnet to January.” Mary Ann Murray, who had also read at the QE2 in the early days, read a poem she had sent me a couple years ago, “A Note to Tom” then one from memory “Candle Power.” & I read another poem I’d written after Tom’s death “Chasing Tom.”

We gave Tom the last word tonight by performing a piece from The 3 Guys from Albany’s recording Tom’s environmental manifesto “CO2” with his own voice leading us on. A grand tribute to one who made all this poetry happen, his joy & activism rippling on to a generation of poets who never met him.

The rest of the year Poets Speak Loud! continues on the last Monday of the month at McGeary’s Irish Pub on Sheridan Square in Albany, NY, 7:30 PM, with a featured poet & a wild open mic for the rest of us.
Posted by DWx at 7:39 PM