It was the last Monday of the month so I wandered in to McGeary’s for dinner & drinks at the bar & then to poetry in the back room, with Mary Panza in charge, definitely in charge.

Someone signed me up in the #1 slot so I started off the open mic with a couple of fantasy poems (aren’t they all?), “Lilly White” & “Sleeping in Patchouli.” D. Alexander Holiday read a poem by the late West Coast poet/activist Pat Parker (1944 - 1989)  “One Thanksgiving Day,” a poet about whom you should know.

A poet quite still with us (thankfully), Carrie Czwakiel, read poems from her journal kept at age 14, “Castle Mute My Anger,” “Rain Drops” & “Turning Back Again” (about her parents). Bob Sharkey began with an “Ode to Our Laundry Basket” then one of his signature fortune cookie poems “Feckless Fortune.” Julie Lomoe read the memoir pieces from a trip to Colorado that she had read recently at The Low Beat about buying legal (!) pot “Rocky Mountain High.” 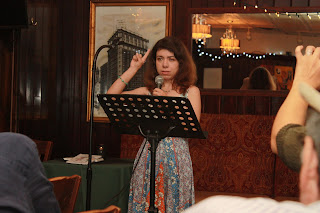 Tonight’s featured poet, Alyssa D’Amico, had come to Albany with her parents from Queens, NY to read here. Her poems appear in the latest issue of Up the River, which is how she got invited to read tonight. She read from her book Short Circuit: An Epileptic Journey (Shires Press, 2017), a journal of sorts collecting poems on different moments in her “journey.” This includes the description of being in an ER “Waiting,” the narratives of 3 brain surgeries (“Conversation” & “Caught in a Storm”), but most importantly coming to terms with who she is in such poems as “Epilepsy” (with its line “epilepsy is a part of me..”) & “Different Girl.” As often happens here in Albany, many of the poets in the audience bought her book or made trades with their own books - Support Your Local Poet.

Harvey Havel talked about his latest project ghost-writing a book & helping with the fund-raising through social media. Don Levy read his humorous poem considering the possibilities of “Bus Hottie 201.” 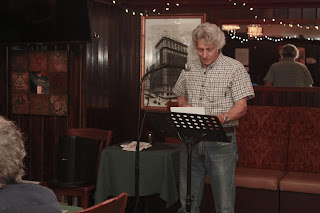 There was a time when Rich Tomasulo would frequent some of the early poetry venues, like the QE2, but we haven’t seen much of him lately; tonight he read “Birthday Wish” a memoir piece, then the imagined poems “In Coconut Grove” & “A Good Death” (which he said he read 10 years ago). I think the next reader’s name was Sam Maurice, or some variation of that, & he read a fragmentary piece titled “Symphony 23 in Easy Damage Management.”

Christa DeMarco read 2 poem, like letters, in which she confronted on “other,” “Exercise Your Demons” & “In the Darkness.” Joe Krausman was awash in synchronicity with his poems “How to Have Sex at the Age of 90,” & “Brain Surgery.” Avery concluded the night with the harrowing 2-part narrative “How To Install a Fan.”

The last Monday of most months is a good time to find poetry at McGeary’s on Sheridan Square (across the street from the Palace Theater) in Albany, NY, 7:30PM, with a featured poet surrounded by an open mic. Bring poems & a donation.
Posted by DWx at 4:41 PM