This was an open mic with all the right elements: a great feature, an open mic with regular community poets we all enjoy, new voices, & a host that keeps (dis)order, Mary Panza — not to mention the food, drinks & attentive service from Mark. The feature(s) tonight was a poetry/sound-scape duo of poet Mike Jurkovic & guitar maven Nick Bisanz. But first a segment of the open mic.

First up was Sally Rhoades with a couple of older poems, “I Will Be Your Poet Tonight” & a poem remembering her mother “Glazed Donuts.” I read a Thanksgiving poem of sorts from my 2011 chapbook Poeming the Prompt “The Birds’ Poem of Thanks” then an old sex/love poem “Gods.” Joe Krauseman read a poem about a banana stickup “Highway Robbery,” followed by a poem considering Shakespeare’s quote “What’s In a Name.” Brooke Kolcow returned again to read 2 energetic pieces, “Cheery Love Poem While Meeting His Family,” & “What Will You Do with an MFA?” (she can check out my 27 suggestions here on YouTube). 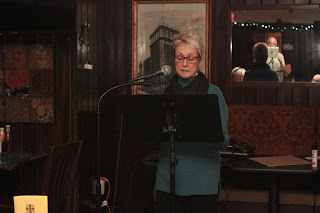 A new voice tonight was Pam Ahlen  who was just passing through with her husband & found us online; before reading her poems (Mary let her do 3!) she told us about the annual Bookstock Literary Festival in Woodstock, VT at the end of July, click on this link for info. She began with a poem titled “Finding Superman,” then one about birds in her yard “Stopover,” & a political piece “The First 100 Days.” 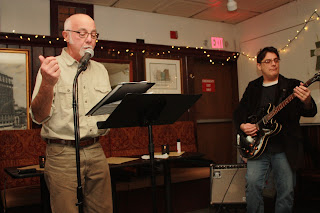 It was time for the featured duo of Mike Jurkovic & Nick Bisanz. Poetry & music, like the old Beat’s poetry & jazz, has the advantage of if you don’t like poetry, or understand it, or even hear it, it can be fun just to listen to the music. Nick’s guitar licks were especially respectful of the words in not over-whelming them, although there were points where Mike’s words were not intelligible, due to not enough volume on his mic. Mike has done his time as a reviewer of rock music so this was a logical match. His poems are a mix of the grim, dirty, dystopic world, alcohol, & cynical social commentary, well-matched by Nick’s guitar licks quoting rock classics, & his own warped improvisations. The poems included bar encounters, such as “8 Stools Down,” “Topeka,” & a meeting with a girl he knew 50 years ago “Putnam Valley Serenade.” I thought I picked up on a piece imitating The Nails’ “88 Lines About 44 Women.” A great variety of poems with ringing guitar work, no mosh pit, no light show, no tickets I can’t (& don’t want to) afford. Good show.

There were a few open mic poets left, also worth the price of admission. Bob Sharkey read a piece about a fight in a laundromat “Waiting for the Load to Dry,” then a funny piece on what a white nationalist world would look like, “After Doing on Peanut M&Ms in Game 6.” Brett Axel made a rare appearance with a poem riffing on his sister’s favorite stuffed animal “Ranilla,” & the instructions on “How to Write Pastoral Poetry.” Karen Fabiane read new poems “Laughter in Cakes” & “After the Meadow,” mixing reality & myth, saying she was “gonna read them until they make sense.”

Poets Speak Loud! happens each (most) month on the last Monday — no reading in December — but come back in January, 7:30PM at McGeary’s on Sheridan Square in Albany, NY, follow them on AlbanyPoets.com.