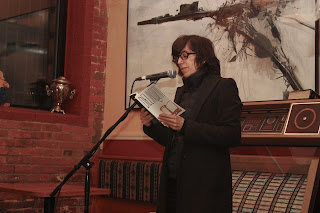 Misha Pam Dick read from each of her 3 books. The first, Deliquent (Futurepoem Books, 2009), I believe I heard her read from at the 3rd Annual Welcome to Boog City Festival in Brooklyn in September, 2009. They are short, prosy descriptions of urban encounters. For that book she was identified as Mina Pam Dick. Her second book, Metaphysical Licks (Book Thug, 2014) is a hybrid prose/poem novella, with the author identified as Gregoire Pam Dick, referencing the lives & work of Georg Trakl, the Austrian poet, & his sister Grete. Her third book,  this is the fugitive (Essay Press, 2016), focuses on the work of another Georg, Georg Buchner, particularly on Woyzeck. It is similar in style to the earlier works, but the writing much more compulsive, driven. 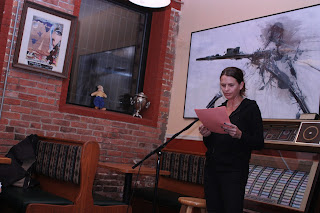 Anna Moschovakis wrote a blurb for this is the fugitive, & apparently drove up with … Pam Dick from NYC. She read, as she said, “a prose,” a manuscript titled “The Capacity to Be Alone,” a meditative narrative about writing a novel (including a long list of alternate titles), a terminated pregnancy, with a digression on viewing a book as one’s “child,” with references apparently to the British pediatrician & psychoanalyst Donald Winnicott. 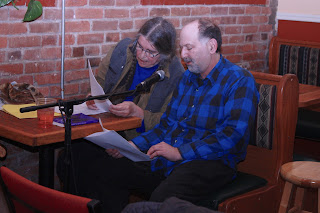 The final reader is more well-known to local poets for her readings & for her challenging workshops in her home in East Nassau, Bernadette Mayer. She began with a few pieces from A Bernadette Mayer Reader (New Directions, 1992), “Marie Makes Fun of Me at the Shore,” “Tapestry,” & “Thick.” The next piece seemed to be a manuscript, that sounded like a recipe “Shadow Biosphere.” She even read an apocalyptic Trump poem. She & Philip Good ended the night with a collaborative piece, “Alternating Lunes,” appropriately enough read alternating. While the first 2 readers were serious & read quite deadpan; Bernadette Mayer, among other things, eschews unrelenting seriousness, with her readings punctuated with a smirk, a smile, & her characteristic chuckle.

The St. Rocco Series takes place on, mostly, a monthly basis, at various & sundry venues around town. The next one will be on Saturday, January 20, at 7:00PM at Urban Aftermath Books, 295 Hamilton St., Albany, with readings by Michael Leong, & Amanda Huynh.

[In case you’re wondering, Saint Rocco, whose Feast Day is August 16, is the patron saint of bachelors, & dogs, among other things.]
Posted by DWx at 8:28 PM

The colab by Bernadette Mayer and Philip Good is called alternating lunes.