Our stand-in (& stand-up) host was once again the poet/humorist/satirist Daniel Sennis, on Zoom. If you don’t know his work check out O Conman! My Conman! - Sick Rhymes for Sick Times (Shires Press, 2020).

David Graham was first on the list & read 2 poems titled “Summons,” the 1st by Robert Francis, a poet important to David, on friendship, then his own a parallel poem, from his book The Honey of Earth (Terrapin Books, 2019).

Alan Catlin said he was reading the most recent 2 poems that got accepted for publication, “The Only Memento” a simple pack of matches bringing back memories of a wedding, then “Unable to Sleep in the Heat,” intensely descriptive, as the best poetry often (usually?) is. 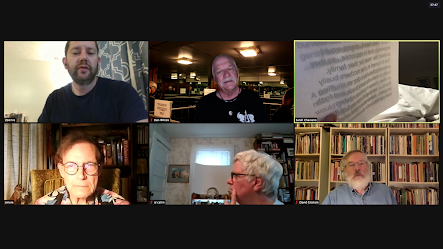 Sarah Chaviano said her short story “Bonnie & Clyde” was based on a song, & in this episode the couple go to a pawn shop to get a new pair of nylons.

I read 3 pieces, one on death, “Stardust is Us,” then “Backyard Sutra,” & one based on the names of local streets “In the Neighborhood.”

Daniel Sennis read a couple pieces from O Conman! My Conman! a relationship piece, “Fortune’s Jewel,” in rhymes, then more rhymes “There is No Sleep for the WIC Kid.”

Sarah asked to read again & her piece, “Washington Heights,” was memories of that NYC neighborhood, images of tossing sneakers to the wires, Spanish TV, Liberace.

Like most open mics, you never know what you might hear & this night, even with only a few readers, the variety was exhilarating. You can find the Zoom link on the Facebook page Writers Mic, add your voice to the stew.

This open mic series keeps chugging along out of Bennington, Vermont, formerly in a brew pub where it was only able to draw a few poets (in actuality this is not surprising since Vermont is the 2nd least populated state in the country, Wyoming is the least populated).  But with Zoom it has doubled its open mic sign-up sheet with more than half the poets reading this night Zooming from states other than Vermont.

Tom Nicotera, was 1st on the list, with his first round poem “Love Mechanic,” about waiting for his car to be fixed, pondering having someone fix his love life, then later in the 2nd round a memoir poem about fishing with his father “Dreaming of Fish.”

Kenn Ash ended up in different spots on the list in the two rounds, in the 1st round here after Tom (in the 2nd round he was after Tim Verhaegen) with a grim wise-guy piece he called “The Great Awakening,” in rhyme about crushing the skull of a bird who lands on his window sill.

I followed Kenn in the 1st round with a new faux Chinese poem “Backyard Sutra,” then in the 2nd round when I followed Tom Nicotera with a pastiche (the 2nd I’ve done) of William Carlos Williams' signature poem “this is just to say,” this one addressed to my daughter Madeleine. 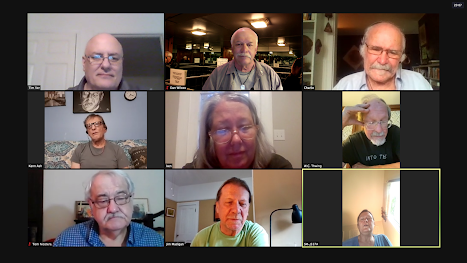 Tim Verhaegen went hi-tech & shared his poems on the screen, but I’m so used to just listening I was distracted by the text on the screen & didn’t take good notes. In his 1st round a poem reacting to a workshop critique session what’s “gay”/“not gay” in his poem, then in the 2nd round a piece about a spider & a child “Saving the Child” (not a “gay” poem).

Bill Thwing, not in Vermont, read the 1st time around what he termed “a very, very innocuous poem,” about a light show titled “Living Waters Change Fast,” then as he began his 2nd round we could hear some thwanging from his guitar & he responded to Tim’s spider poem with a song about a spider that grows to an enormous size.

Laura Ellzey, who is one of the readers actually in Vermont, read “My Blue Heron” a poem in rhyme, then in her 2nd round sang beautifully in Spanish “Me Olvidé De Vivir” a song by Julio Iglesias.

Our host, Charlie Rossiter’s 1st round poem was titled “Lakeside Inn in Union Pier Michigan” a descriptive piece about a place he used to go to out that way, then later a poem he wrote based on 20 different translations of a Chinese poem about a fishhawk.

Jim Madigan who was Zooming in from the Chicago suburb of Oak Park (where Charlie once lived), recalled the horrific shooting in Orlando, FL in 2016 in a poem titled “Silver Disco Ball,” then in the 2nd round a political piece on surveillance “Unified Spy Agency,” a take off on the children’s game “I spy with my little eye…”

The final reader was Bridget Elder, who had actually attended the open mic when it was in the brew pub pre-pandemic, in both rounds read from a series of memoir pieces about her deceased mother.

So, no matter where you are on the planet, you can join this open mic from Bennington, Vermont, USA on the 2nd Tuesday of each month. If you are not yet on Charlie’s preferred list you can email him at charliemrossiter@gmail.com & request the link. Hope to see you there/here.