Back to 2nd Sunday, but still not in the black box at the Arts Center in Troy. As the folks gathered we talked about food under COVID. Nancy Klepsch & I were the hosts, taking turns.

Speaking of COVID, I began with my poem from September “Words in the Time of COVID-19: Saxophone” that responded to a Blog by Carolee Bennett (https://gooduniversenextdoor.com/2020/08/21/pandemic-diary/), then to a newer piece “My Last Poem” (I hope it’s not).

Sally Rhoades read her most recent poem “First Light” about on waking, then one written at the Scissortail Creative Writing Festival in Oklahoma “I can’t hear you…”

Bob Sharkey read another of his re-writes of Chinese fortune cookies “Fortunes for a Zoom Reading,” then a section from May Gaitskill’s “This is Pleasure,” commenting that one thing he misses a lot is walking the streets of NYC.

Joel Best read his recently finished piece, “Off Season,” on the change of seasons, with walking & lost prayers.

My co-host Nancy Klepsch read a pandemic piece, “You Know My Mother was from Corona,” with images of remembrance, then one titled “Unfortunate Daughter.”

Tim Verhaegen’s poem might have been titled “City Slicker,” I wasn’t sure, it was about taking a drive to Cooperstown, describing things looking "like a bad still life."

Tara Kistler wanted to be last & she was! with a short piece titled “Pygmalion,” you can guess what it was about.

You can find it on Zoom each 2nd Sunday @ 2, check it out on Facebook for the link.

An interesting thing about this Zoom open mic, hosted by Charlie Rossiter in Bennington, VT, & also one of the characteristics of Zoom readings, is that most of the participants were not from Vermont at all, but from other states being New York, Connecticut, Pennsylvania & Illinois. While I look forward to going back to in-person open mics, particularly the one I ran on the third Thursday at the Social Justice Center in Albany, NY, I do enjoy seeing & hearing these other poets from elsewhere.

As he likes to do, Charlie had us read 1 poem, then go around again for a 2nd poem.

I began with a holiday theme, “Christmas Eve 1945,” then in the 2nd round another of my imitations inspired by Chinese poets, “Swordsman.”

Kenn Ash began with a short poem about leaving some things behind to wish us a merry Xmas, & played a short version of Thelonious Monk’s “Straight No Chaser” on his pocket trumpet; the 2nd time around he read a personal manifesto proclaiming “I stand with the oppressed.”

Tom Nicotera read about seeing “The Great Horn (Owl) in the Backyard” (in Connecticut) while he was doing the dishes; later returned with the Emily Dickinson poem “I Taste a Liquor Never Brewed” (her birthday coming on December 10). 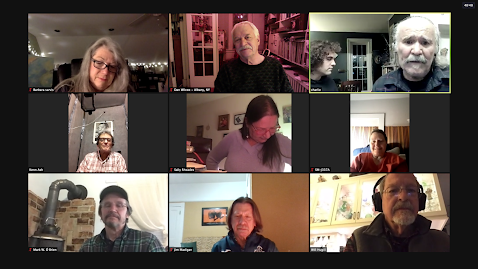 Bill Thwing, joining us from Pennsylvania, read a haiku series in 6 parts about losing power; back around again he brought out his guitar to play/sing a Thanksgiving Poem of sorts, “Everything Comes from the Ground” [& as poet Gerrit Lansing famously wrote, “Everything goes underground with glee…”].

Our host, Charlie Rossiter, in his first round read a road poem about going to the beach in the Fall, “The Last Swim;” like Bill before him, on his 2nd he round sang a song, “Stuff It Xmas Style,” accompanied on guitar by Jack Rossiter-Munley, a holiday tune about big box stores & Santa Claus.

Laura Elzey, one of the Vermonters here, read a poem about poetry & feelings “Where Did This Come From?” then next time around read a bilingual piece in Spanish & English “I’m Going to Knit” about how peaceful she feels knitting.

While this was Sally Rhoades’ 1st time Zooming in here, she had made the trip over from Guilderland, NY on occasion to read when the readings were being held at the Tap House in Bennington; tonight she read an angry letter to President Trump about the election “Sour Grapes;” later she read a pensive poem about her womanhood “I Carry the Heavy Burden.”

Jim Madigan was the poet from Illinois & he read a letter he had to sent to his congressman “A Wish for Leonard” (to free the native activist Leonard Peltier); he finished up with a road poem about going to Sandy’s Cafe for breakfast “Marango.”

If this sounds like fun (& it was!), you can email Charlie for the Zoom link for the next 2nd Tuesday Open Mic out of Bennington at charliemrossiter@gmail.com — tell him “Dan sent me.”

What Mondays Are Made Of - so says the FB page & so it is, with our host D. Colin. She likes to begin these events with a poem of her own, this night she read two short ones, the first a praise poem for a friend’s birthday, then one about wanting a lemon tree for her yard so she could make lemonade from her own lemons.

Then on to the sign-up list, Aiysha Simon read “All You See is Tip” an extended metaphor about what’s hidden beneath a relationship.

I haven’t read here in a couple months, although I have tuned in a number of times, read a Thanksgiving poem “The Birds’ Poem of Thanks” from my 2011 chapbook Poeming the Prompt, then my most recent poem “Ancestry.com.”

Fatima read a long essay titled “From Days to Days,” dealing with colonialism, the Earth, playing on the etymology of words like “base” & “paradise.”

Marie Kathleen read a couple of poems from college, “Time Capsule” written early in the quarantine, & “Simple” how a term she saw as negative she now sees as positive.

Mojavi popped up, read 2 short love poems apparently without titles, “If I could write the sky …” & “I want you to become intoxicated by the essence of me…”

John began with an untitled piece on what this poem is “not”, then one titled “The Wall” filled with images of bees.

D’Naia began with “Rainy Days” about how we should embrace them even though/because they are messy, then a ranting response to someone who I guess had the initials “ABW” which was the title.

Danielle takes lines she likes from the open mic & at the end turns them into an instant cento,  creating a soup, a gumbo, of the words of the open mic poets. 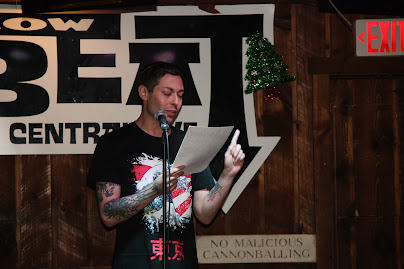 Tonight’s featured poet was Greg Wilder who signs up as “Slay the Dragon.” He has been out & about in the open mic poetry scene reading not only here at Poetic Vibe, but also at Poets Speak Loud at McGeary’s, at Brass Tacks at The Low Beat, & at the Social Justice Center where I had hoped to schedule him this year, but COVID-19 changed all that. His reading tonight centered around his recently self-published book Slay the Dragon Presents … Pink Cloud Poetry: Poems from Early Recovery, with a few others not in the book thrown in. He began with “A Universal Monster” using elements from 1930’s black & white horror movies & TV shows, using Zoom’s screen sharing to show images, a story of a drug overdose & a broken arm. Other poems from the book included “Forecast” addressed to a “sexy weather girl,” also one he said he had not read out before “A Drowning Man,” & one of my favorites “Addicted to Poetry” set like being at an AA meeting. The pieces not from the book included another favorite of mine, a love poem to Emily Dickinson filled with humorous sexual wordplay, wordplay being one of Greg’s most used tools in his poetry tool box, & a new poem finished just his morning a pandemic poem titled “The Virus” with TV graphics, like his first piece, & panic buying, Zombies, just like the real thing.

You can find Greg’s book on Amazon at https://www.amazon.com/s?k=pink+cloud+poetry&ref=nb_sb_noss but also perhaps elsewhere if you’re willing to look.