Back at O’Brien’s Public House, I did not want to miss the rare appearance of the incredible poet Rebecca Schumejda. There was a scant handful for the open mic, but, again, some making a rare appearance. Our host was R.M. Engelhardt with a preachy piece on poetry & social media, “Tips on Becoming Incredible.” 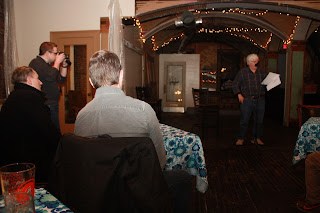 Making a rare appearance in Troy, Alan Catlin read a collage-style poem on drugs & movie stars “Hollyweird,” the title poem of a new collection, then a more recent & gentler “The Good Life.” Picking up the Hollywood theme Rob jumped back in with a haiku on the death of Charles Manson. I followed with 2 poems published this past year in Hobo Camp Review, “Lew Welch in Albany” & “Traveling America.” Also making a rare Trojan appearance BK Tuon read “Sunday at the Beach” about his young daughter’s encounter with an aggressive little boy.

Betty Zerbst read the 2 poems she read in the recent “Day of the Poet” competition at the Colonie Library, a couple of rhyming pieces, “The Trees of My Childhood,” & a bio-in-verse of her father “He Was a Boy.” Editor of Hobo Camp Review, James Duncan, read from his latest book We Are All Terminal But This Exit is Mine a childhood narrative “Strawberry Fields Forever.” 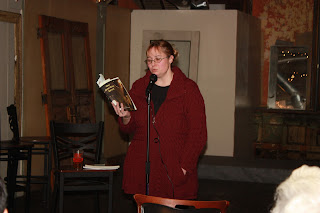 Rebecca Schumejda is one of my favorite poets writing today, locally or nationally. She read tonight from her brand-new book of poems from NYQ Books Our One-Way Street that continues & expands the working-class tales from her previous books, Cadillac Men (NYQ Books, 2012) & Waiting at the Dead End Diner (Bottom Dog Press, 2014). She began by way of introducing some recurring characters with some poems from the 2 earlier books, “Where the Game Takes You” & “The Table Swallows Wally the Whale” (from the pool hall poems), & from the diner book the poems “No One Cares” & “After Shift Drinks.” From the new book she read “The Past is a Gold Cross Necklace,” “357 Prospect St.,” “Hurricanes” (a bar) & “When Someone Wins.”  Looking forward to the continuing saga in her new book.

Thom Francis was a last-minute add to the list, read a breakup poem from 20 years ago, “Still.” Rob ended with his latest version of yet another encounter with God, this on the bus, “How the Cosmic Entity Deals with Assholes.”

Check out this monthly reading & open mic at O’Brien’s Public House on 3rd St. in Troy, each last Wednesday of the month, sign-up at 7:30PM, reading starts about 8:00PM.
Posted by DWx at 7:51 PM