The joint was jumpin’ for the featured poets, Marilyn Day & Leslie Neustadt, but also for the open mic poets. Of all the poetry open mics I go to each month, this event consistently has the longest list of readers. The great crowd was sheppared by our host Carol Graser, who got us off on the right step by a short poem by the poet Ruth Stone (1915 - 2011).

Barbara Ungar made a rare appearance in the open mic with 2 topical pieces, “Your Mother Serves Tongue” (on the abuse of women), & “Après Moi” (with the repeating refrain “Let them eat …”). 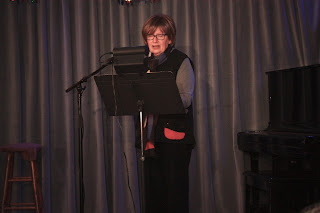 Susan Kress read a memoir of her parents, of her stealing from her father, “Thief.” Kate McNairy’s first poem was about stars & lust “Zodiac” then a related (perhaps) poem “Upon Turning 63.” Debbie Bogosian, a volunteer here at Caffè Lena, read a couple of rhyming Xmas poems -- ’tis the Season you know. Rad Wilson was new to me, read a poem on fishing (& death), & one on physics titled “God the Spooky Quantum Ghost.” Suzanne Rancourt read a piece mixing images from a dream & from a gallery in Canada “Swimming Bear,” then a more edgy one in an urban setting “Walking In Winnipeg.” 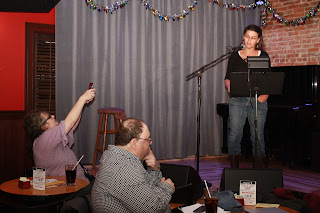 Speaking of “edge,” Naomi Bindman’s first poem was titled “The Lunar Edge,” then one about thinking about a breakup & looking at a budding tree “May Surprise.” 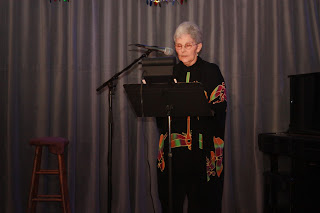 The first of the night’s 2 featured poets was Marilyn Zembo Day. I hadn’t seen Marilyn out reading in quite some time & the poems she read tonight were longer, with more of a topical/political edge, than I remember of her readings in the past, such as her first poem that she said was a sestina, “Paint Boxes & Whorls,” about a rape, a much-needed rant, then on to another titled “We Were Never Meant to Survive,” inspired by a poem by Audre Lorde. Another poem was inspired by a poem by Gwendolyn Brooks, “The Priestess Shines with Gratitude & Stature. Not surprisingly there were poems from workshops, such as one on the elections of last year, “Wake Up Call” & an emotional piece on the current opiod addiction crises “Vulnerability Study.” & on the lighter side, an older piece on her passion for cook books. 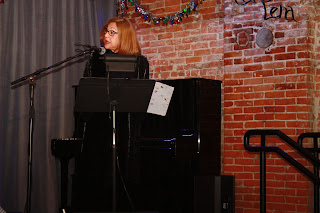 Leslie Neustadt began with the title poem from her collection Bearing Fruit (Spirit Wind Books, 2014). A number of her poems were also on political topics, such as “Unholy Commerce” (on Khmer Rouge sex-trafficking), one on Kurdish women fighting ISIS, another about a North Korean who was a survivor of the bombing of Hiroshima, one read because of the President’s announcement today about moving the US Embassy to Israel to Jerusalem, “Trembling at the Threshold of Jerusalem,” & a found poem taken from an Alt-Right publication. “Exodus” was a poem from a dream, “Health Alert” was on Trump (again), “Incurable” was a cancer poem, while “Healing History at Schuyler Flats” was about uncovering a slave burial ground. Others a bit lighter included “Tabula Rasa,” “Salt Wars” on her son’s cooking, & “Baptism” for her grandchildren.

After such powerful poems from both features, we needed a break to catch our breaths, then back for the open mic, with Carol reading her poem “The Appendix,” another in her series of objects-as-persona. Terry Bat-Sonja began with a poem to her late husband, then a humorous “Oh this Poor Poem.” I was pleased to hear Alyssa Benaro read again, tonight a touching, musical narrative, “Steps,” about a young boy, whose twin had died. Marilyn McCabe read 2 pieces based on a friend’s research of single-cell organisms, “Adaptation to Extremes” & “The Santa Barbara Basin Dead Zone.” It was good to see Mary Kathryn Jablonski here tonight & to hear her read a new poem, “Monsters.”

Rodney J. Parrott read a piece about Trump, what he described as “a wake-up call to our better halves.” Leslie Sittner likes to write rhyming humorous pieces, tonight she read “The End of Fall” & “Ranting for the Health of It” (about the annual Medicare enrollment). Once upon a time Jodi Frank read at lots of open mics in Albany, but I haven’t seen her out in a while, so it was fun to hear her tonight; she read “I Want to Let Her Down Gently” (to her sister re: Santa — & refugees), then a poem she said was the first poem she ever read out at one of my open mics “Smooth Socks.” Amejo Amyot is one of the founders of Women Writers & Artists Matrix, she read a tribute poem “To Leslie” then a poem from a workshop (seems to be a theme tonight) “Birkenstocks” & I was surprised when she announced that this was her first open mic reading(!). 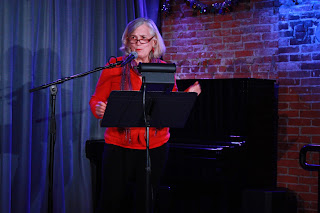 Another surprising first-timer was Linda Murphy who read a celebratory rant on the January women’s march “We March.” Judith Prest’s first poem connected with two of the night’s threads, “Steel” was written at a poetry class & it was based on an Audre Lorde poem; she also read a piece titled “What I Want.” I read just one poem, a new piece “Golden Shovel for Split This Rock.” Sally Rhoades read a couple of poems about her family, “Riding Shotgun” about her Aunt, then “Chapter 2” with family stories — & with her sister in the audience hearing for the first time Sally read her poetry. 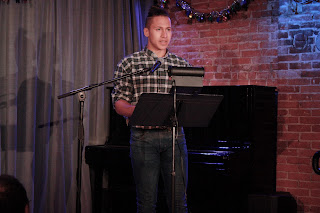 Another first-timer here tonight was Harper Brace with 2 Autumn poems, “Sunday School” & “Jessica’s Letters.” Don Levy was his bold self with a poem about poets at the old QE2 in Albany “I’m a Fucking Poet” & “Just Say No to Nazis.” Kristen Day, Marilyn’s daughter & a good poet herself, sang a song for her mother (& father) the Kenny Loggins’ classic “Danny’s Song.” W.D. Clarke read one of his Robert Service style ballads, “This Christmas Tale.” Dineen Carta read from her book Loving the Ache (2015), the topical & powerful poem “Please” with its opening line “These are not my tits…” & the post-Christmas “Her.” Gloria returned to read “Prayer,” a poem from 2014 about her 2nd rape, asking to be reborn as a tree.

It was a bright shining night of self-assertive poetry, with the 2 featured poets, Marilyn Day & Leslie Neustadt, setting the tone — & the open mic poets stepping up.

The Caffè Lena Poetry Open Mic takes place each first Wednesday of the month, starting at 7:30PM, at the historic Caffè Lena on Phila St. in Saratoga Springs — put a poem in your pocket.
Posted by DWx at 12:09 AM