This was NG Slam #119 or #122, no one was quite sure; my notes from a NG Slam in May indicate that was #127. A cadre of the hard-core Slammers have been meeting lately in an effort to re-vitalize Albany’s competitive Slam with plans to go to the Nationals.  Tonight there was a short open mic list & an equally short Slam list here at The Low Beat on Central Ave.

Amani started us off with a long poem from 3 years ago about suicide awareness, & how to make our Heaven on Earth. I followed with an old poem set in the old Justin’s “Jim Morrison,” then a new poem to my daughter Anna “Waiting for Jacqueline Robinson.” Elizag read from her 2014 collection of poems Love Cohoes “What I Hate About Cats.” Liv read one of her social commentaries about the contradictions among the hip that she is so good at, one beginning “Dear Hipster Eatery…” Sean J. got the audience clapping with a short piece that he stumbled through.

There were 4 signed up for the Slam & some confusion, it seemed, as to how to run that through to the end (more on that later). Amani was the “sacrificial poet” to calibrate the judges & did a piece on urban gardening. Elizag scored a 10 with “First Date,” then D. Colin got 2 10s with a piece about her first period. Liv did “prodigal” from her chapbook, & Sean J.’s machine-gun delivery was appropriate for “Death by War.”

The scores weren’t announced but Round 2 consisted of all 4 back to read from the highest to the lowest — D. Colin, Elizag, Sean & Liv, who this time got 3 10s. 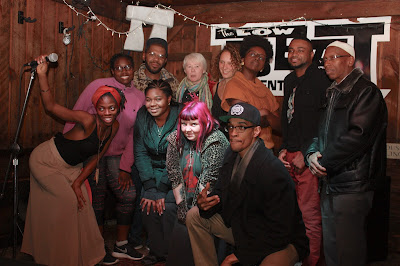 The Final Round began with Sean, then Liv, both with self-assertive pieces that seemed to be the theme du jour, with Liv getting 1 10, then D. Colin blew them away with a perfect score (there were 3 judges) with a political/personal piece “On the Pulse of Ancestors.”

Then just to extend the evening, D. Colin did a “Victory Lap” with 2 pieces, one on her name & the popular piece “Little Black Girls” jumping rope.

I’m glad that some folks are working to bring more organization & direction to the Slam scene here. As with all arts groups I think it is important that it not result in being perceived as a closed group, & that the flow of the night & scoring be spelled out for the audience, since hopefully there will be new people unfamiliar with Slam rules & practices showing up. I think that each round be an elimination round. Taking tonight’s rounds as example, after the first round of 4, the second round should consist of 3 performers, ending up with 2 going head to determine the winner. If there are more than 4 in the first round, the second round could go to 4 & the third (final) to 2. That’s enough poetry for anybody for one night.

Watch for notices about upcoming Slams on social media & the local poetry calendars, such as on AlbanyPoets.com. Anyway, I hope to get out to more of the Slam events in the coming year & help cheer on a local poet to the National Slam Championships.
Posted by DWx at 5:50 PM