Up to Schenectady for this monthly open mic, with tonight’s featured poet, “the queen of pantoums,” Carol H. Jewell.  Our host, Catherine Norr, was back, & started us off with a verse from the venerable “Shaker Hymn.”  The sign-up sheet was already filling up when we got there.

Alan Catlin began the open mic with poems from a series of poems with titles of paintings, some that could be real, “The Graveyard of the Beach Chairs” & “Dark Tree in Front of Dark House.”  Richard Jerin read a couple poems about remembering the past, the first untitled, the second titled “Prayers & Diaries” (about the Holidays).  Judith Prest was back with a political piece “What I Want” & a poem about rape after 50 years “After.”  Ginny Folger read from a series of “postcard poems” “Childhood,” “Summer,” “After Sundown.” 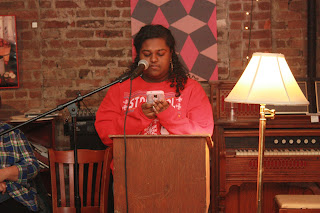 A new voice tonight was Tazjouna Pannell, an open mic “virgin” who read an alliterative, inspirational piece “It’s Interesting.”  Last month’s guest host, Jackie Craven, read a couple poems from a series in the persona of an angry/disappointed wife (she said that she is not either), “Autopsy” & “Shadows at 4PM.”  Bill Poppino made a most rare appearance here to read a family narrative about “man trappings.” 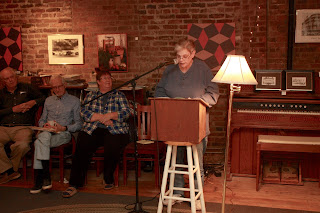 The featured poet, Carol H. Jewell, had with her for sale her attractive, new 36-page book of poems from Clare Songbirds Publishing House of Auburn, NY Hits and Missives, from which she read.  Of course, there were the pantoums, “The Embrace,” “The Dream,” “Crestfallen,” & the tour-de-force “Cento Pantoum #1” & “#2” both composed of lines from other, more famous poets.  Also from the book, “Attachment,” “Carolina ’81,” “Chestnuts 1967” (with her father, on the subway in NYC), “Brother Memory” & “The Cure for Everything” (with the great quote from Isak Dinesen about salt water).  & she threw in the new pantoum “Appetite.”  Support your local poet — buy her book.

When we returned after the break Catherine Norr sang a brief song praising the harvest.  Dawn Marar, who also has a new book a-birthing, began with a poem inspired by Edward Durrell Stone’s fountain at the UAlbany campus, & the city of Jordan “Gathering Rush” & a poem inspired by Istanbul “The Basilica Cistern.”  The perennial rhymer Betty Zerbst read a poem about her children growing up, away “Left Behind” then a tender poem for her mother “When You Were Here.”  Susan Jewell (no relation to our featured poet) read a couple poems about the Great Depression, one her mother’s story “A Child’s Story” the other from her mother’s father “A Father’s Tale.”  Malcolm Willison was saying goodbye as he escaped for the Winter to Key West with his poem “Envoi.”  Mary Panza made a welcome, rare appearance here to begin with a poem about memories in black & white photos, then a funny, metaphoric piece about using a Maxi-pad to soak up spilled coffee in her car’s cup holder.

Rick Frieberg breezed in off-list as he usually does with short, recited street pieces, rhymes & lines like fuzzy memories of songs.  I followed, much more formally on-the-page with, not a pantoum, but “The Sestina Sestina.”  Don Levy read a disappointed-in-love break-up poem titled “This is Not a Break-up Poem.”  Scott Morehouse read an evocative, cutting portrait of a society widow picking up guy in the blue light of The Blue Room.  Carol Graser brought us all home with a feminist manifesto “Discourse on Myself Addressed to the Patriarch.”

This open mic is the highlight of the Schenectady poetry scene, & it happens each 2nd Wednesday of the month at Arthur’s Market at the monument in the Stockade section of Schenectady, NY — 7:30PM — worth the drive from anywhere, even Schenectady.