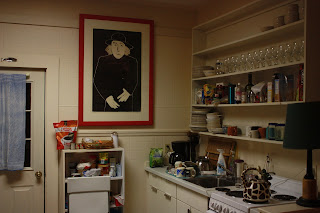 Cape Ann is my favorite place for a retreat, & if I time my visit right, I can catch the monthly open mic, as I did for this recent trip to the sea. Amanda Cook, a member of the GWC Board, is the host. There’s always a mix of poetry & prose, both fiction & memoir, & tonight was no exception; some were writers I’d heard read here on previous visits.

When I signed up, it looked like someone had signed up first, then changed his mind & crossed his name off, so I took the empty spot; I read my poem to my daughter Anna, “Waiting for Jacqueline Robinson,” my wine-stained copy of “The Day God Invented Wine,” & the short “Amithaba.” Chuck Francis read a sad & chilling story, “Herbie,” about a foster child. Phil Storey’s poem, “Midnight Mass 1975” was about a man dropping dead in church. 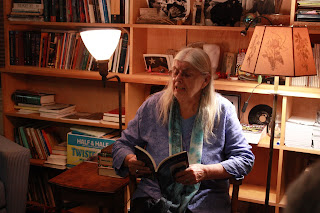 Rufus Collinson read from a published book of her poems, the pieces titled “Talking to Strangers,” the enchanted vision of “Sea Smoke,” “The Beginning of a Difference,” & “Delivery.” Elizabeth Endfield read her laptop a narrative poem, re-written today she said, titled “The Seagull & the Crab.” Don Kipp read a cluster of poems, “Amazing Machines” (about our bodies), “Only Their Tears Moved,” “Recipe” (about an encounter on a bus), “Moon,” & “The Waking Eyes.” 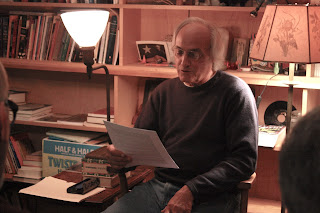 Joe Rukeyser read a quirky fantasy titled “The Good Life of Avram & Havah,” about a health-fanatic, over-the-top environmentalist couple who die in an accident & are offered a way back to life eternal on Earth. I’ve heard Virginia McKinnin read here before from her memoirs, tonight she read a letter to the Editor of the Gloucester Daily Times, & a poem “Freedom is Not Free.” (Note: the current exhibit at the Cape Ann Museum of photo portraits by Jason Grow of local World War II vets includes one of her husband Robert McKinnin.) Ian McColl began with a statement about his writing as rain, then read/performed his piece “Insomnia,” including fighting, drinking, song lyrics & a brief summary of his life. Roger Davis began with talking about his process of writing, a quote from Mary Oliver, & talked about his grandmother reciting the poems of Robert Service, then read a poem of his own using Service’s rhythm & rhymes.

Our host, Amanda, read an amusing poem on memory, “I Am Forgetting the Names of Plants.” Bob Gutman’s long, rambling piece “You Gotta Love It” had something to do with horses, & began with a long dedication. The night’s final reader, Jorgelina Zeoli, read from part 2 of her 3-volume memoir about growing up in Argentina & her ongoing therapeutic conversations with God, The Way Out, this segment about her mother’s psychosis.

So if you happen to be on Cape Ann on the 1st Monday of the month, stop by the Gloucester Writers Center at 7:30PM for the open mic. It is located in Vincent Ferrini’s old house, at 126 East Main St. — Gloucester, it’s not just lobsters.
Posted by DWx at 9:29 PM