Another packed house for poetry in Saratoga. Our host, Carol Graser, started us off with an early poem of Walt Whitman’s “O Me! O Life!” Then on to the open mic list. 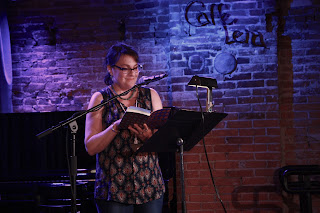 It was refreshing to see Susan Riback reading at an open mic, beginning with a piece about perusing one of those airline magazines on a British Airways flight, then a piece on computer dating “Passport to Confidence.” Austin Halpern-Graser was back once again with his stand-up comedy routine, this on growing up & being away at college. Eric Krantz read a memoir about taking his aged parents back to Queens to look at the house they used to live in. & speaking of houses, Thomas Dimopoulos read a story about a homeless guy in Saratoga Springs from his collection Saratoga Stories: Magic & Loss (available at Northshire Bookstore on Broadway). 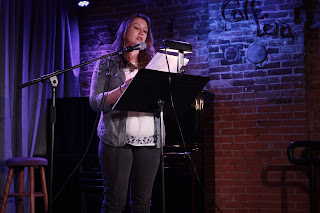 Tonight’s featured poet was Alifair Skebe, whom I find it difficult to get enough of. In & around her own work she shared poems by others, such as Dwayne Wilder, Susan Deer Cloud, & David Landry. Her own poems included “With Tiger Force,” “Kerrville” (from the early Love Letters: Les Cartes Postales), & a poem based on Lucille Clifton’s “What the Mirror Said.” From Thin Matter (FootHills Publishing, 2017) she read “Mirror Riddles,” “Poem for ISI[S][L],” “Seen This Before,” “When I Died” (based on Emily Dickinson), “US War Production Board,” “Freedom,” & the tour-de-force political piece “The Dead & Dying Poem” after Muriel Rukeyser’s “Twentynine Poems.” Alifair also has a new chapbook just out from Benevolent Bird Press The Voyage of the Beagle, an excerpt (An Interlace Poem), short pieces using the text from Charles Darwin’s work, from which she read “Here You Are.” Always different & always worth hearing.

After a break, Carol Graser returned us to the open mic with her poem “Ghosts of Ambitions” on writing & being a poet. Carol Jewell read a very short poem (5 words) titled “Puzzle” then read “Poem without a Title.” Serena tempted us with the wonderfully provocative “Do You Want It?” in which she explored euphemisms for having sex, then a piece written to buoy up a friend “And So God Lived God Became.” It was good to see some of these regional poets like Katrinka Moore who doesn’t make it out to open mics to read, tonight “King Lear In a Nutshell.” Dawn Marar’s poem “On the Road to Damascus” was an ironic piece on danger from a visit to Syria, “Knots & Bolts” on seeing an old lover. Anna Feldstein, one of the Caffè Lena workers, read “Late Train” an unsettling story about an encounter on a train & remembering a father she never had. Maya read a complex love poem remembering a love “70 in February in Upstate New York.” 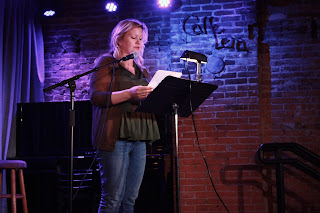 Brigit Gallagher is a high school English teacher who inspired & brought some of her students tonight (& last month as well); she read a piece inspired by her young daughter “Every Kindergarten Girl is a Feminist.” Dan Bonville read a couple poems in rhyme, one for boys “Life of Reduction,” the other about the Sun “Summer.” Will read 2 pieces out of his battered notebook. I read selections from Inauguration Raga (A.P.D., 2017). Mary Kathryn Jablonski does not read out near enough so it was a thrill to see & hear her tonight read “On Hearing that Crayola was Retiring ‘Dandelion’.” Nicola Marae Allain read from a series of poems based on growing up in Tahiti, rich in lush images & characters. 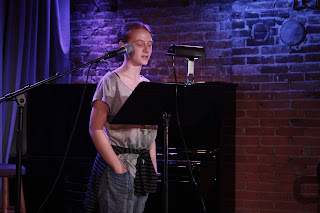 Thanks to Ms. Gallagher — & to the Caffè Lena ambiance in general — there were tonight some talented young people reading excellent poems; one of those was Becky Steele with a poem composed as a series of questions “Silence.” A more experienced poet, Joe Bruchac, contributes frequently to the open mic & tonight read a poem about the sacred place we know as the Black Hills. Jesse Mews does a combination of memorized pieces enhanced by free-style, usually without titles, tonight’s pieces were about being awake at 4:00 in the morning, the other on observing a pigeon in an alley. Another young woman poet, J. (or was it Jaye?) Woods read a piece about an ex “Letter from the Arctic Circle.” 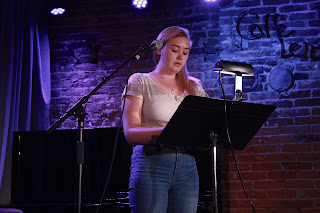 Ava Champion said she usually writes short fiction (which I’m sure would’ve been OK to read) but instead read one of her poems “Smothered Love.” Sage was our last poet for the night with a poem about needing inspiration & passion “I Can’t Write Poetry” then a series of questions “If Not…”

This reading is held each 1st Monday of each month in the newly renovated space of Caffè Lena on Phila St. in Saratoga Springs, NY, at 7:30PM — $5.00. It includes featured poets & an open mic for the rest of us.
Posted by DWx at 2:31 PM