The first of the new year’s third Thursdays meant we were back at the Social Justice Center for the open mic & a reading by novelist Harvey Havel. & we still hadn’t gotten caught up with the dead poets of 2016. Brooklyn-born Irish poet John Montague went to that poetry reading among the stars on December 10. John was a great friend to Albany poets, having run a (free) workshop for the Writers Institute for community poets, for many years. I was pleased to be in it in 1989 & in 1995, & to have John as a guest for dinner in my home on a couple of occasions. To honor his memory & to invoke him as tonight’s Muse, I read his poem “Sheela Na Gig.”

Alan Catlin, who had been in many of John’s workshops, was first up for the open mic, read from “Hollyweird,” a work in project, a piece spun off from the film American Psycho, a memoir of college years. Richard Jerin returned with a poem from 20 years ago, a piece titled “Take Back.” Joe Krausman is also an alumnus of the Montague workshops & read a poem that he has entered into the Jewish Currents Reynes prize contest “The Wall.” Thérèse Broderick was next “With Ease” a poem about going to the gym, doing yoga. Taking us on a political turn, Frank S. Robinson, reminded us that in spite of our (mis) (pre) conceptions of “Who We Are.” 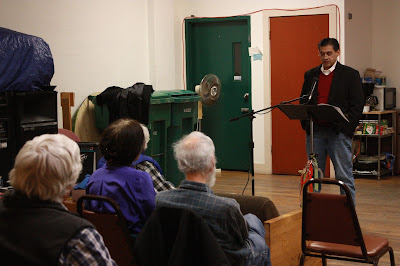 Harvey Havel is a novelist & short story writer who frequently attends this Third Thursday open mic but rarely reads. Tonight he was our featured reader & he started with a short story, “The Mother & Her Son,” a fable-like grim tale of a boy battling a cobra to protect his mother. This he followed with “Ode to America” an actual poem, a descriptive rant full of dark & violent images, political & personal.

After a short break I returned to continue the open mic with my poem “A Shill at the Fair” responding to Howard Kogan’s latest book A Chill in the Air (Square Circle Press). Karen Fabiane followed with a poem she wrote for R.M. Englehardt’s call for entries for poems reacting to the election of Donald Trump “Kremlin Along the Potomac.” Bob Sharkey read “January 16th” a poem about reading someone else’s poem, a poem he said that “wrote itself.” The final poet for the night was Brian Dorn who read a poem from his book, “Prophecy,” that he has rarely read out (this was only the 2nd time).

The Third Thursday Poetry Night takes place each month at 7:30PM at the Social Justice Center, 33 Central Ave., Albany, NY, a featured poet & an open mic for the rest of us — $3.00 (more or less) donation.