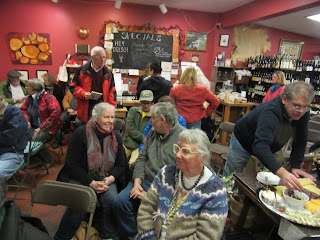 A packed house in The Cheese Traveler to celebrate Alifair Skebe’s new book & to hear her read a selection of her poems. If one is to have a poetry reading, better to have it in a small space as opposed to some huge stadium, better to say “the place was packed” than “there were a lot of empty seats.” 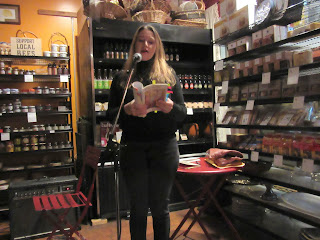 She then read from Thin Matter what she called “a labyrinth of poems,” suggesting we let her reading wash over us, mixing her metaphors, & beginning with the poem “Halo.” The poem “Desire” was originally a broadside & she said the poem could be read differently each time, which gave sense to the page-layout in the book. Others read included a dream-like “Spinning Paper,” another that was a piece of a multi-part poem, & the almost obligatory “Hudson.” I’m continuing to read through these intriguing, sensuous poems, enjoying the wash of images & ideas.

The advantage of having this reading at The Cheese Traveler, 540 Delaware Ave., Albany, NY is the fine selection of refreshments served before & after the poems, the cheese, olives & wine that were as poetic as Alifair's words.