This series continues at Narvrona Restaurant with our host Thom Francis presenting Albany poet, performer & poetry entrepreneur Mojavi. I have known Mojavi since the earliest days of open mics in Albany & he was one of a handful of the artists who worked to link the black & white communities to share out work. 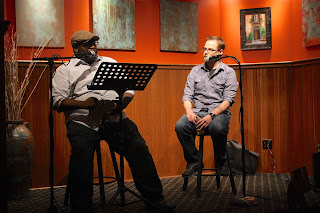 By way of introduction Mojavi talked about his early days confronting the nascent Albany poetry scene, braving the QE2 open mic, going on in the late 1990s to create Soul Kitchen at Clayton’s, then the Urban Guerrilla Theater at The Linda, then on to a piece that was a true story of the cruelty of children, his stutter & a teacher who taught him to speak. “I Will Save Myself” was a 10-part piece on his ex, then a moving letter to his son. On to poems of sex, love & sex & love, everything from the curvy ladies to a kid needing a hug. His last piece was one of his classic Slam performances, “The 1st & Last Time I Smoked a Joint.”

During the questions & answers with Thom Francis, Mojavi talked more about his childhood problems with speech, how he began at age 7 to write in notebooks so that he didn’t have to talk. He also talked in more detail about Soul Kitchen, even recalling a performance there by “those 3 white guys” Three Guys from Albany. He said Urban Guerrilla Theater was a chance to do his own thing, follow his vision & link up with some really good people. He was also part of the earliest Nitty Gritty Slam Team giving him a chance to take his art to other parts of the country.

Albany Poets Presents! is an on-going series every-other month at Navrona Restaurant, 289 New Scotland Ave., Albany, NY during which a poet/performer who has had an impact upon the local community is showcased with a reading, then an interview & questions & answers from the audience.  For more details check out AlbanyPoets.com.
Posted by DWx at 9:10 AM