This is a bi-monthly continuing series held since last December at Restaurant Navrona in Albany (NY). Tonight’s presentee was Albany poet, vice-(emphasis on vice) president of Albany Poets, bar-tender, masseuse, mother & bitch-on-wheels Mary Panza. El presidente Thom Francis began by talking about the first open mic he ever attended at Borders with Mary as host, & how terrified he was. He then turned the mic over to Mary for a reading of her poems, including recent ones, & a couple of her “Housewife Tuesday” Blogs from AlbanyPoets.com.

Mary began with a poem about her daughter, “The Little Blond,” then on to a funny (as she often is) Housewife Tuesday about family & grocery shopping. A poem for poet Chris Rizzo was based on Charles Olson’s famous statement from his essay Projective Verse, “Form is never more than an extension of content.” She wrote about hope in “Prisoners of a Cardboard Story,” & about herself & self-realization in a piece set in a club “I Want You To Know.” She ended with a Housewife Tuesday piece from a recent trip to Hawaii that brought her back to forgiveness & her roots as a Catholic through a Buddhist monk’s chanting. 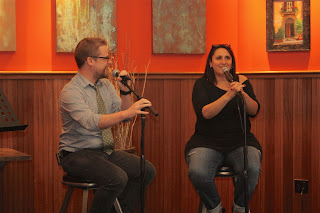 The reading was followed by a series of questions, from host Thom Francis & various audience members. “You are so creepy,” was Mary’s response to Thom’s questions about favorite/least-favorite words & what turns her on (vodka, by the way), but she did admit that Nick Bisanz was her favorite harmonica player, & that she regretted being “mean.” She said what got her started was soap opera, the QE2 & the open mic she ran at Borders on Wolf Rd. Now, she finds the poetry scene different, the “family” spread apart, but that it keeps on going. As for herself, she likes reading other people’s stuff, appreciates their sensibility, & has grown to like editing.

I have seen Mary Panza grow & mature from her (& my own) tentative early days at the QE2 open mics, to become the confident, hard-working writer & Mom who is one of the Elders of the Albany poetry scene. & it is a credit to Thom Francis for presenting this series every-other month about & for the poets who keep active in the area writing & spoken-word scene.
Posted by DWx at 9:26 AM