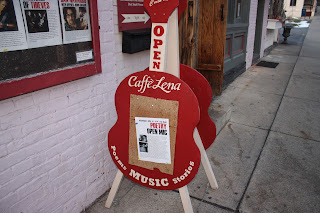 Up to Saratoga Springs for the open mic at Caffè Lena. Our host, Carol Graser, started us off with a poem by Jamal Nay(?), “Hum for the Bolts” (of cloth, that is). Then on to the open mic before the scheduled featured poets, Lisa Wiley & Peter Marcus.

Joe Hesch was first on the list with a poem about a writer facing the blank page, “You Are Here,” then one titled “The Shoes You Only Wear in the Rain.” Tim Sneider recited a poem by James Kavanaugh, then his own biker poem, “Q and A.” Debbie Bogosian was the night’s volunteer at the door read her poem “Ain’t Hindsight Wonderful” then one that played on the various meanings (& implications) of “Plumbing.” Eric Krantz began with a poem set in East Brunswick, NJ about his dog “Early Morning Musings,” then the humorous rhyme “Why Not Take All of Me.” Kate McNairy’s short little ditties were “Armadillo” & “A Cup of Rum Tea.” 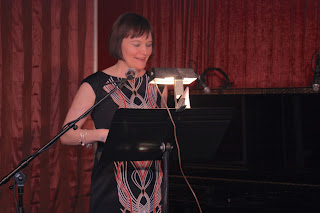 The first of the 2 featured poets was Lisa Wiley, who had driven here from Western New York with her husband. She read a good selection of poems from her book My Daughter Wears Her Evil Eye to School (The Writer’s Den, 2015), beginning with “Why My Mother Won’t Attend My Poetry Readings” (she wasn't here) then an April poem (& the image on the cover of her book) “To My Yellow Converse” & the title poem. Another poem inspired by her daughter was “Cello Lesson,” while “Strawberry Island, Late Summer” was about a place she went as a 10-year old. Lisa also has a book of villanelle’s from Finishing Line Press, Chamber Music & she read the title poem & “Love at Starbucks” from that. She included one of e.e. cummings love poems, “I carry your heart” (a poem I read at my wedding in 1979), then a poem for her husband, Art, “The Anchor,” & then later another for Art “Back Porch, the Summer I Turn Thirty-Nine.” There were also a few California-inspired poems; then her final poem was about the heroin epidemic, that as a teacher, has touched her directly, “Clean.” 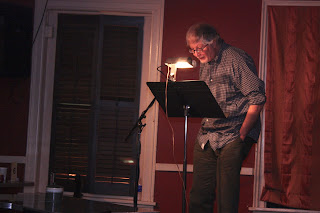 Peter Marcus was the other featured reader, from not-so-far away in Western Massachusetts. He began his reading with 2 Winter poems (& tonight, although it was April it felt more like February), a poem about the homeless “Winter City Lullabye” & the short lyric “Snow” from his book Dark Square (Pleasure Boat Studio, 2012). Other poems that he read from the book included “To the Pier,” “The Insomniac’s Pet Shop,” & “The Embrace” (from his experience as a psychologist in an in-patient hospital). Paul commented that he was varying his playlist to respond to some of Lisa’s poems, read his poem “A Common Music” on parents & music, & “The Pig River Carries 2 Lines by Du Fu,” adding to his social justice themed poems, such as “The Only Fires” (Tibet), & later included a poem on the brutalization of black men “The Lies of Too Many” & a poem set in Cuba “Landscape Almost Carved by the Sun.” Another sleep poem was “The Origami of Waking,” as was his final poem, a multi-part meditation “The Going.” This was a brilliant pairing of 2 very engaged poets who communicated well with the audience.

After a break to buy & trade poetry books, Carol Graser returned with her persona poem “The Haiku.” Judith Prest said her poem “Mooned” was written at Pyramid Lake & inspired by a poem by Dorianne Laux, then a poem titled “Awake.” James Schlett read a series of Haiku on Winter & his daughter. I followed with my homage to Don Levy’s open mic series Live from the Living Room “Should I Stay or Should I Go” then “Poeming” from my chapbook Poeming the Prompt. 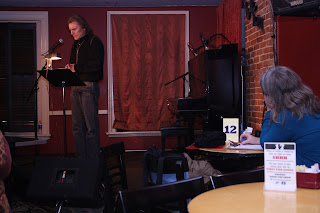 Rodney Parrott, whom I missed as the featured poet here last month, read a long poem, with his dancing hands, from his novel The Wanderer. Charles Straney had 2 poems on “starting,” from 2010 “Spring Sledding” (guys standing around trying to start an engine), & one written this month “Spring Starting.” Thérèse Broderick read “She Slips Away,” a tender poem about visiting her daughter in Morocco. Tai introduced herself as a high school senior, read her poem “Aging” imaging herself growing old, then the self-assertive “Just Me.” She was the last on the sign-up sheet, but Paul Marcus, who had just heard of the death of Merle Haggard, wanted to end with a poem with Haggard in it & read “At the Pair of Dice Bar.”

Carol announced that in the months of June, July & August this open mic will move to Northshire Bookstore on Broadway in Saratoga Springs while renovations take place at Caffè Lena, but otherwise this reading & open mic takes place on the 1st Wednesday of each month, 7:30PM, for a modest donation.
Posted by DWx at 5:54 PM