Student Amber O’Sullivan introduced Bernadette Mayer with one of the best introductions in an academic setting I have heard in a long time, telling us “I’m not going to talk about…” but of course talking about what she didn’t want to talk about by not talking about it (or something like that). 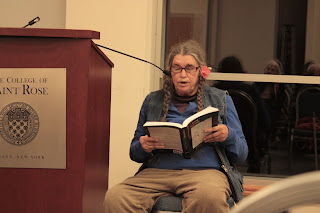 Bernadette is teaching a course in the MFA program in creative writing at the College of St. Rose, & many of us in the larger poetry community have benefitted from informal poetry workshops at her home here in upstate New York (without paying exhorbetant tuition fees). Tonight she began with a long litany, at Barbara Ungar’s request, of all the “phil” words, a long compilation of ancient Greek words for the things we love, such as philalogia, philanecria, etc. Bernadette loves (“phila-“) wordplay, often for its own sake & read some of her earliest poems that wallowed in it, such as “Moon in 3 Sentences,” “Laura Cashdollars” (a high school classmate), “3 Men Resting,” & “Yellow Orange.” She ended with her “absolute most favorite poem to read,” available in Scarlet Tananger, an early work of hip-hop, “Words That Rhyme with Disease.” 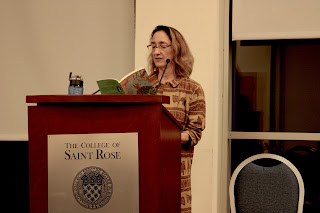 Alyssa Cohorn did a more conventional introduction for Barbara Ungar, who read her own “Phil poem” from Immortal Medusa (The Word Works, 2015) “Dead Letters,” about mail being delivered to her house addressed to a former occupant. Continuing on with more from Immortal Medusa she read “For the Weather,” “Things Do Not Look As Dismal As They Did” (a found poem listing endangered species), the title poem “Immortal Medusa,” & “A Young Person’s Guide to Philosophy.” Then on to a couple new poems with dead poets connections, “Emily Dickinson’s Estate Sale” & one she said was based on Frank O’Hara’s poem “Ave Maria” “Maria Lactans” (the Nursing Madonna).

A great pairing of 2 local poetic treasures.
Posted by DWx at 9:30 PM