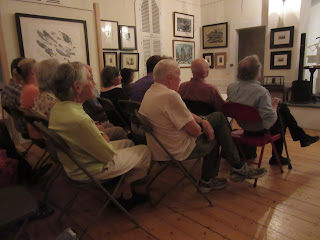 Back in June I had reserved a room at the Good Harbor Beach Inn on Cape Ann for the first few days of September. It was beautiful beach weather & there was reading on this Wednesday evening at the Rocky Neck Cultural Center to “Celebrate Labor Day and Jonathan Bayliss’s Birthday.” The reading was of labor connected themes from Bayliss’s Prologos, the huge first volume of his Gloucesterman tetralogy.


Henry Ferrini (one of the founders of the GWC) served as host (& videographer) & introduced Cape Ann artist Thorpe Feidt who had worked as a typist for Bayliss when the novels were being written. Bayliss is a writer’s writer, his texts are dense with description, commentary, arcane (& made-up) words, serpentine sentences & Proustian paragraphs like concrete blocks tossed into the air. One of the readers, Martin Ray, commented that the book(s) should be read out loud. I was unfamiliar with Bayliss’s work, but agreed, being hypnotized & seduced by the richness of the language & the intricate cadences of the passages read. These dealt with the main character’s experience in New York City around World War II working in a machine shop, & delivering parts to unfamiliar neighborhoods in the City. The words created the sound, the smells, the oil & curled shavings, the repetitive demands of the lathes & gears & belts. Each reading was only a couple of pages long, but they were pages of thick prose, like chowder.

The readers included, in addition to Henry, Martin Ray, Doug Guidry, David Adams, Victoria Bayliss Mattingly (the author’s daughter), Ken Riaf, David Rich & Peter Anastas.  You can find a moving & informative eulogy for Bayliss that Anastas delivered in April 2009 on this Blog, A Walker in the City.

Gloucester has been the home &/or subject for many writers, including Rudyard Kipling, T.S. Eliot, Charles Olson, & Vincent Ferrini in the past, & living authors such as Gerrit Lansing & Peter Anastas, among others, & the Gloucester Writers Center is the place to see & hear them, & a steady stream of visiting writers. There is even an open mic on the 1st Monday of the month. It’s not just the beaches & fresh lobsters, you know.
Posted by DWx at 3:15 PM