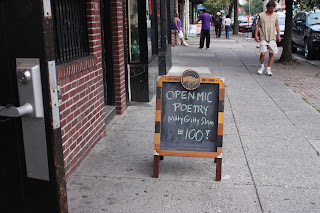 Nitty Gritty Slam is 100! Albany’s longest running Slam venue, & tonight was the Night of Champions where last year’s champion gets to defend his (metaphoric) belt against a roomful of this past year’s Slam winners, including members of the Nitty Gritty Slam Team just back from the national competition in Oakland, CA. Of course Reality is always a shade different than the PR. I was sitting at the bar of The Low Beat to observe it all.

el presidente of AlbanyPoets was off on a (well-deserved) vacation, so his help arrived late while the rest of us were wondering who was going to come up with a sign-up sheet, who was going to take over. Fortunately, Kevin Peterson arrived soon after, found an official sign-up sheet & hosted the open mic.

Ainsley, a regular here, was first up with a stirring piece about gender confusion at age 7, with her line about checking out another’s pants becoming a riff. I followed with an old, seasonal piece the “Altamont Fair Poem.” L-Majesty’s urban rhapsody, “Green Street Blues,” was a bit of imagined memory, new to me. Poetyc Visionz began with an informal discussion of impressions of his & the Team’s time in Oakland, then on to a heavily alliterative performance piece. 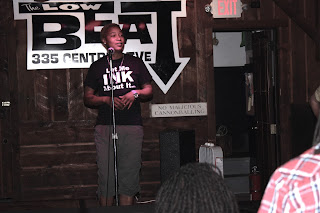 Speaking of performance, one of Albany’s most compelling spoken word performers, The Poet Essence, made a rare, & welcome, appearance, with a crafted poem about “45 Movie Titles” (really).

Kevin, who was the defending champion, was a bit perplexed about how this would work, particularly how he could be the host & defend his belt (the actual belt is/has been in South Carolina with a former champ for a couple years now) by competing. He introduced the Slam competitors, Poetyc Visionz, L-Majesty, Eliza, then Amani as the sacrificial poet, who took over as Slam-master, freeing up Kevin to compete. There were only 3 judges, just enough. The scoring was a bit hard to hear & follow at the bar, what with the playing of background music between each performer, but perhaps one wonders if that was intentional, &, besides, no need for me to know the scores.

What with only 4 Slammers, Round 2 was the same as Round 1, just in a different order. Eliza distinguished herself in both Rounds with Slam pieces which were pretty much real poems as well, both having to do with lovers, the first using the ocean & the second your heart/my heart as central images. 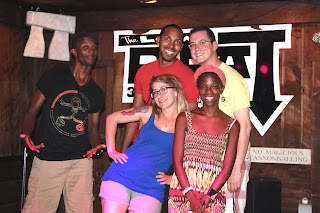 The Final round brought Poetyc Visionz & Kevin Peterson head-to-head, with P.V.’s more traditional Slam piece on the number 7 taking the belt from K.P., though his piece about his Dad, “Gravedigger,” was moving poetry.  I never did find out who was in 3rd (or for that matter, 4th) place.

In the photo, from left to right, P.V., L-Majesty & Kevin Peterson in back, Eliza & Amani in front.

& so the Nitty Gritty Slam moves on into the next century — each 1st & 3rd Tuesday at The Low Beat on Central Ave., just a door down from Quail St., supposedly at 7:30PM.
Posted by DWx at 8:22 PM