Live from the Living Room, February 11


Hard to get a parking spot with the snow emergency in Albany, but that didn’t deter poets from finding our way to the Pride Center to hear featured poet Edie Abrams & to read our own poems in the open mic. 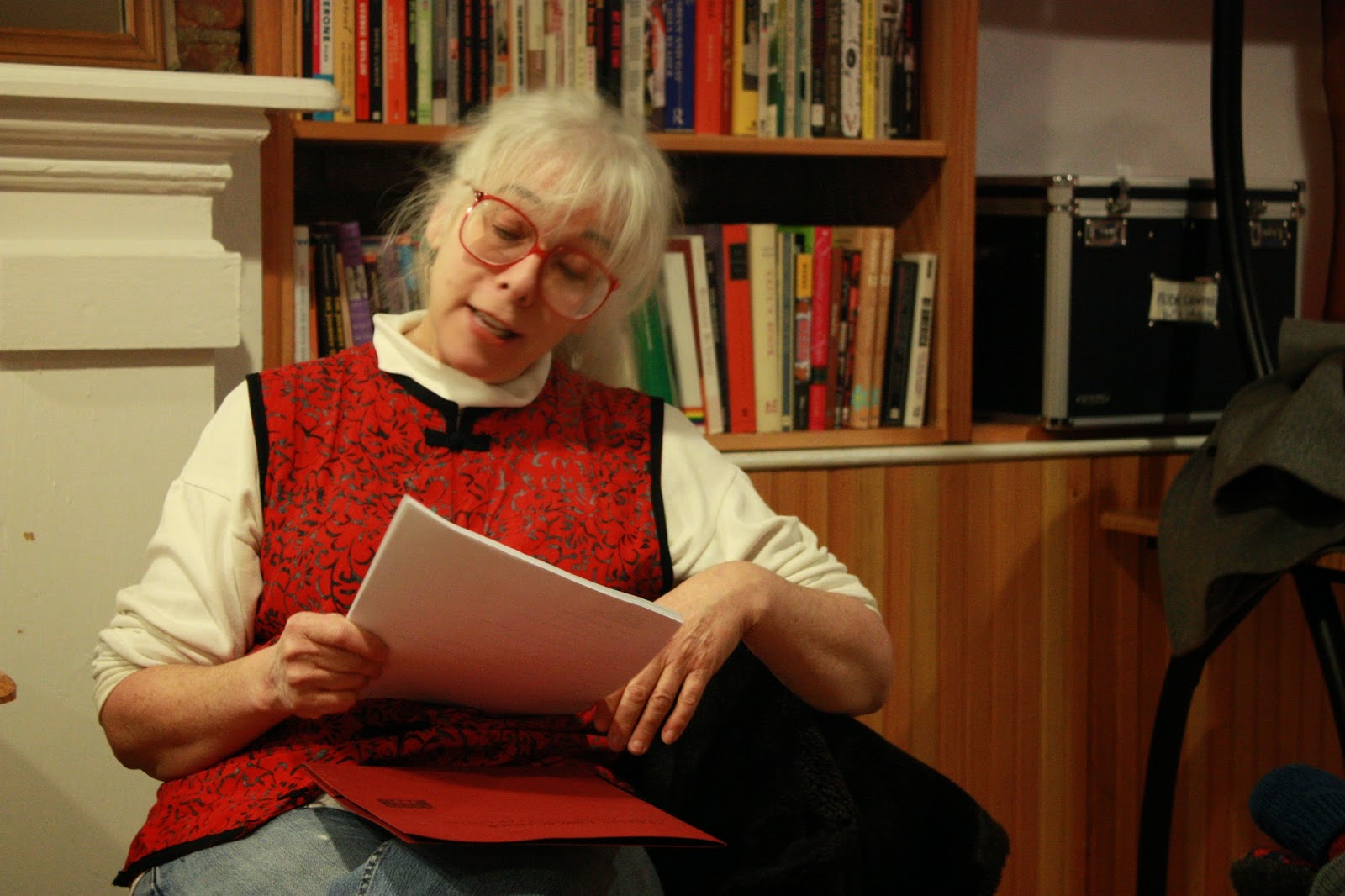 Edie Abrams is one of the co-hosts at the monthly reading/open mic, Sunday Four Poetry, held in Voorheesville at the Old Songs Community Center. Tonight she had time to stretch out & read a number of poems. She said she picked out some poetry from when she first moved up here, beginning with the first poem she read to the poetry group at the Voorheesville Library in 2003, “Not Deutschland,” from a nightmare about a plane trip to Germany. Next she read “Happy 90th Birthday Pop” & on to a string of untitled poems about her mother, her grandmother, about moving to Voorheesville from NYC, her recent retirement, a tour of the Y (& relaxing in a tub after), about sweating & going bra-less in the Summer, & about snow dancing the Hora. The poem “She Doesn’t Want To” was about a student in the school where Edie is a volunteer aide, while “The Hole in my Thigh” was about a cancer. For the season she included a Valentines poem, then read an exercise from Bernadette Mayer’s workshop in which the assignment was to write like Jack Kerouac. She ended with her latest poem “Treading the Soft Snow” then circled back to another early poem, a narrative that played on the catalog of clichés, “The Cowboy.” Good to hear a substantial sampling of Edie’s work, spanning the years.

For the open mic I read an older piece “Winter Argument” then on to a this year’s “Birthday Poem 2015.” Sally Rhoades talked about the annual Scissortail Creative Writing Festival in Ada, Oklahoma & read a poem inspired by her trip there last year, “Silence,” then a new poem “A Full Moon.” Jessica Rae read a very short love poem “Fickle,” then “Farewell” whose title says it all. Our host, Don Levy, finished off the night with a poem a dinner in memory of his Dad, “The King David Diner” & a funny piece about a sex education film in high school “50 Shades of Vomit.”

Then we had to return to the snow-covered streets of Albany. But there is poetry — a featured reader followed by an open mic — each 2nd Wednesday of the month at 7:30PM at the Pride Center of the Capital Region, on Hudson Ave., in Albany, NY, enter the doorway under the stairs.
Posted by DWx at 2:15 PM