The first reader on the short list of open mic poets was Brian Dorn who read about what inspires his poetry, “Her Attributes.” Jeff S., whom I hadn’t seen before, did 2 short pieces (& later participated in the Slam), “Another Rainy Tuesday in the Trailer Park,” & “Noodling the Noodler.” Amani began her untitled piece on lovemaking versus homemaking with singing a bit of Joni Mitchell’s “Little Yellow Taxi.” Avery, finishing off the open mic, performed “Coming Together” (which wasn’t about sex, I don’t think). 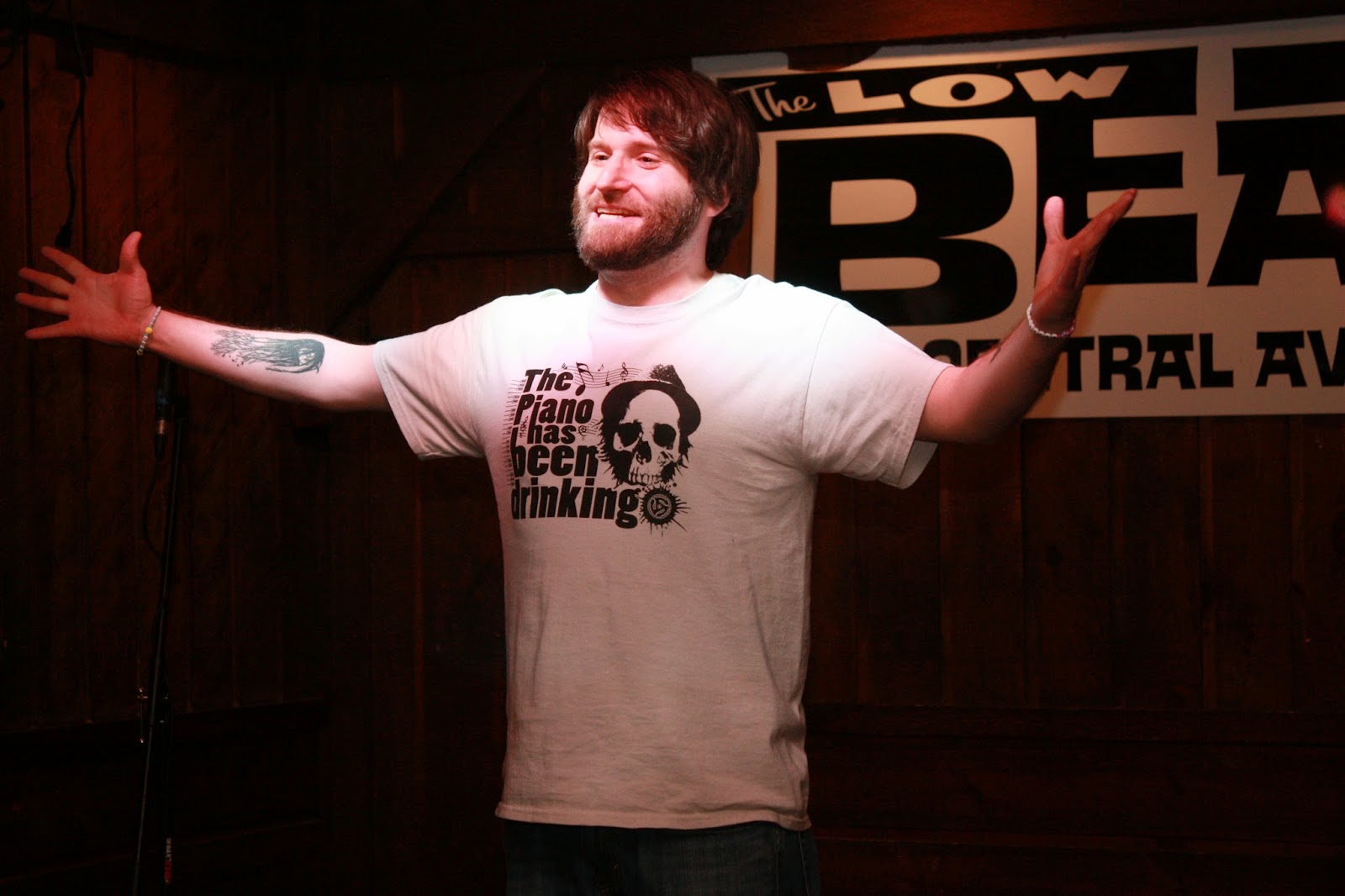 The feature was NYC Slam poet Thomas Fucaloro, who had performed up the block at The Linda in the WordFest Invitational Slam back in April, doing a piece he also did tonight about moving from being a cocaine addict to earning an MFA literary degree (hmm?!). Few of his pieces were introduced with titles, but moved from such topics as being at his sister’s dance recital, to about finding our own ways to god (“No Experience Necessary”), to used books, to having babies, to rape recidivism, to the Dead Poet’s Society. His delivery, while eschewing Slam clichés, was energetic, modeled on stand-up comics, &, yes, Robin Williams. His book It Starts from the Belly and Blooms is available from Three Rooms Press.

el presidente brought us back into the Slam with 7 competitors, ranging from Jimmy on Hobbits, Stephen Roberts’ “The Year the Grinch Struck Back,” K.P. with a tribute to his high school science teacher, Jeff S. “On the Road,” Eliza Ryan reprising (from Poets Speak Loud) “Instagram,” & Algorhythm on experience. I achieved a respectable score of 24 for my commentary on religion “The Lady Bishop,” just enough to beat K.P. & to get me into Round 2.

From there I squeaked by — barely — into 3rd place behind Algorhythm & Eliza Ryan with an excerpt from “Richard Nixon Must Die” that timed out at 3 minutes, 9.8 seconds, as Jeff S. went over time & lost points despite scoring 3 10s (I had scored 2 10s!) with  a piece titled “Scooping Granola” about working in a diner.

So I was “in the money” & could sit back & watch Algorhythm & Eliza battle it out, with the visiting poet coming out on top, a good position for her to be, shall we say.

So, should I keep at this, become a member of the Slam team, delivering real poems to a bunch of punk poseurs, show them what poetry, not performance, is really about? Heck, I’m an old white straight guy in good health. What are the odds? At least I’m not a Republican.